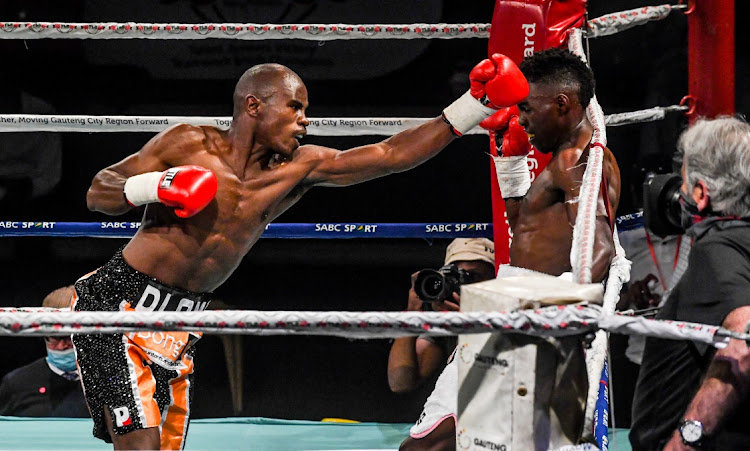 Prince Dlomo wins the junior welterweight fight by TKO in round six against Xolani Ndongeni during the Still Alive and Punching Tournament at Klipspruit Sports Centre on October 17, 2020 in Johannesburg.
Image: Sydney Seshibedi/Gallo Images

Dlomo, from KwaMaphumulo in KwaZulu-Natal whose fruitful career is guided in Johannesburg by trainer Charity Mukondeleli, is fresh from a second defence on Sunday against Xolani Mcotheli. Malinga was at ringside.

"Malinga spoke to me and my trainer Charity yesterday about the fight against Mgidi and I accepted the offer,” said the champion, who can best be described as a late bloomer. His career got off to a rocky start as he lost his first two fights but his patience is paying dividends and all of a sudden Dlomo is in demand.

Malinga then went for recently crowned Mpumalanga champion Mgidi, who is rated a spot below Lebogo. Ndongeni, who is rated at No 2, has shown no interest in challenging Dlomo while Siseko Makeleni – who occupies the third spot – has already had a fair crack at the title and he was defeated by Dlomo in September last year.

“I agreed to defend against Marcus,” said Dlomo. “But Malinga came back to me to say Marcus is out and Mgidi is in and I said fine. I did not take any punishment on Sunday.”

Mukondeleli said: “This is simple; I am the trainer. If Prince wants or accepts the fight on June 5, I have no problems. I told him that it means there is no rest and that he must come back to the gym to start preparing.”

Mukondeleli said fortunately Sibusiso Zingange, who helped him with sparring for his fight last week, is working hard in the gym preparing to defend his SA junior-lightweight title against Lunga Stemela on May 22. “So they will help each other,” said Mukondeleli.

From a mediocre fighter, Dlomo fought his way to the top

Prince Dlomo was written off as a no hoper who must hang up his boxing gloves because he had become so accustomed to losing fights.
Sport
2 weeks ago

BSA thumbs down for Khorombi-Helebe mismatch

Boxing SA’s sanctioning committee has turned down a proposed mismatch between two-fight novice Pfariseni Khorombi and veteran Toto Helebe which was ...
Sport
2 weeks ago

Lightning never strikes the same place twice. This is a common phrase you’ve probably heard before, and it is often used to reassure someone that ...
Sport
2 weeks ago

Representatives of the recently launched WBC SA, Larry Weinstein and Alan Norman, are patiently waiting for the head office of the WBC in Mexico to ...
Sport
2 weeks ago
Next Article