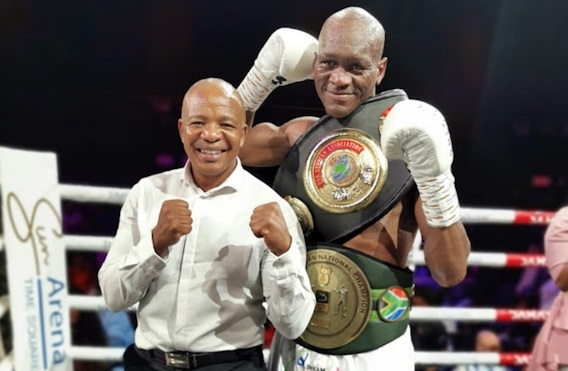 The tournament will be headlined by a rematch between SA middleweight Nkululeko Mhlongo and John Bopape. Mhlongo goes into this fight with a burden of having to outdo himself to avenge his last year's loss to Bopape. Luckily, their fight in Durban was a non-title bout.

“All bookmakers must predict the winner here because their previous fight was a duel that no one predicted,” said Mahoko. "As the saying goes, especially in my language [Sesotho]... when you go in to conquer the cattle, you don’t care; you destroy whatever is in front of you. That is what Mhlongo is going out there to do in retaining the SA middleweight belt.”

Mahoko is responsible for Mhlongo’s career. The main supporting bout pits newcomer Jackson “Soldier of God” Kaptein from Bloemfontein against Khensahosi Makondo in the junior middle division. Makondo, who is rated at No 1 spot, is set to challenge Shervontaigh Koopman for the title, while Kaptein is yet to earn recognition from the ratings committee.

“Sparks are going to fly here,” warned Mahoko. “I warn fans not to blink for they may miss the knockout punch; watch out for Kaptein who will not want to disappoint local fans, and the fact that he will be fighting at home.”

Mahoko added that there will be thrills and spills in another non-title bout between Zolile Miya and Mpho Seforo.

“They have an axe to grind,” said Mahoko. “Seforo wants to avenge the loss he suffered to Miya’s stablemate Thabang Ramagole. Seforo is on a war path against that camp. I promise a night of blood and tears."

The recent hyped up and successful celebrity boxing match between Cassper Nyovest and Anga Makubalo at Sun City made fans and the board members of ...
Sport
3 months ago

Bangile Nyangani refers to Loyiso Ngantweni as an “old man” going into their fight at The Galleria, Kelvin, in Sandton, where Walt Disney Africa will ...
Sport
3 months ago

Boxing SA has begun consulting with promoters regarding the allocation of dates for live broadcasts on SABC, BSA chairperson Luthando Jack has ...
Sport
4 months ago
Next Article