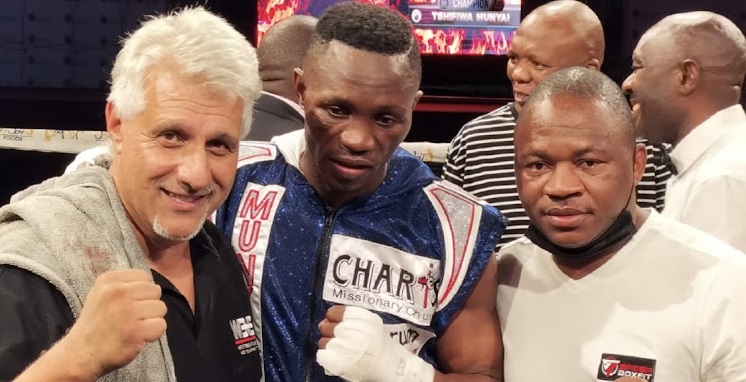 Aphiwe Mboyiya lost the battle against utmost warrior and reigning SA lightweight boxing champion Tshifhiwa Munyai, but the challenger definitely won the war in Middelburg, Mpumalanga, at the weekend.

The fact that Munyai retained his belt by a split points decision tells the true story about Mboyiya’s ability. Judge Ben Ncapayi scored the fiercely contested fight 116-113 for Mboyiya while Siya Mani scored it 114-113 for Munyai.

The last judge, Cyprian Ndaba whose score was the decider, read 114-113 for the champion who registered the third defence on Friday evening.

It was certainly Munyai’s toughest opponent since he won the national title. He got up from  the canvas early in the fight to bring into fore all the experience, superior skills, sharp eyesight and supreme reflexes to overcome Mboyiya whose skills are honed back home in Duncan Village in the Eastern Cape by Kholisile Cengane.

The challenger is a very good boxer and has a granite jaw which stood its ground against well-executed powerful combos. It was Mboyiya’s first fight against a credible opponent since he came back from a two-year ban for failing a dope test in 2017. The four boxers he’s fought are average and did not give him just the right competition that would have prepared him for a tough customer like Munyai.

Mboyiya’s biggest blunder was to let Munyai off the hook after dropping him in round three with a straight left. Mboyiya gave the former world champion space to breathe, and you don’t do that against Munyai.

He is like those old cars that need to warmed up before being driven away. Once he warms up, he becomes as a hot as wire. Munyai is under the guidance of trainer Alan Toweel Junior.

In the main supporting bout of promoter Jacob Mnisi’s J4Joy Boxing, Thato Bonokoane had no difficulty retaining his WBF Intercontinental junior featherweight belt by a deserved unanimous points decision against Innocent Mantengu. Bonokoane dropped Mantengu in round four. The scores were 117-110; 115-112 and 116-111.

Xolani Mgidi was crowned the new Mpumalanga junior welterweight champion and walked away with the newly launched belt after defeating Sam Sithole over 10 rounds. The belt Mgidi won is named after Swati chief Tikhontele Dlamini who did the honours. The fight failed to live up to expectations and Sithole must reconsider his stay in the sport of boxing as he suffered his 12th loss against seven wins.

The tournament – the first for Mnsi at home - attracted a big crowd at the Steve Tshwete Banquet Hall and some of the distinguished guests included award-winning maskandi musician Khuzani Mpungose and entertainer Zodwa Wabantu. The weather was chilly with drizzle but that did not deter fans from singing and dancing in appreciation of the action.

Arnold “Squire” Nododile, CEO of J4Joy Boxing, warned: “This is the just the beginning,, there are even bigger tournaments coming up before Christmas.”

Nonina to use ABU fight to get recognition from WBC

Bukiwe “Anaconda” Nonina takes a giant leap towards reclaiming her acceptance in the international boxing arena since she vacated the WBF ...
Sport
2 months ago

Munyai hoping to take the stares to boxing glory

If physical presence and a soulless glare were the only factors that determine which boxer prevails inside the ring, then Tshifhiwa Munyai will ...
Sport
2 months ago

Fireworks expected in revenge fight between Bulldog and Bopape

One thing is guaranteed for fight fans who will attend Dream Team’s upcoming international boxing tournament that will form part of wild Freedom Day ...
Sport
2 months ago

Experience does not win you fights but skill does, says Durandt

Experience does not win boxers fights but instead it carries them through during fights, says Damien Durandt who has emerged as one of the country’s ...
Sport
2 months ago
Next Article