Inconsistent Miya goes down the rankings

Odds against boxer as he meets Molefe 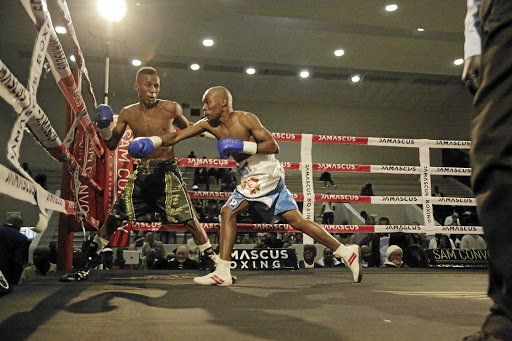 Phumelela Cafu and Zolile Miya had fans eating out the palm of their hands during their impressive 10 rounder on Sunday.
Image: Mudimeli Mulugana

Zolile Miya’s future in boxing seems to be going a downward spiral, and the sooner this talented Sowetan realises that he is becoming a stepping stone to young fighters, the better.

With a clean-shaven head and gliding movement – reminisce of the iconic SA junior welterweight champion Arthur “The Fighting Prince” Mayisela – Miya has been dropped to No 8 in Boxing SA’s ratings in the flyweight division.

Miya is consistent in giving credence to the gossip that he cannot be trusted. If he wins one or two fights in a row he will also lose his next bouts.

But that is actually not a true reflection of his potential. He raised hopes for a brighter future after his draw with Phumelele Cafu over 10 rounds in 2019 because Cafu is such a talented youngster.

But as per norm, Miya lost his next fight to Landi Ngxeke and won the next against Moila. So, the expectation is that he is going to lose the one on Sunday against Mogale Molefe at Booysens Gym where TK Boxing Promotions will stage what will be the first tournament of the year in Gauteng. Miya has seven wins, seven losses and a draw.

If previous performance in a fight determines the future, then Molefe will emerge victorious.

Jeff Magagane must also take serious stock on whether he is there for a cheque or to become a champion. At 31, time is running out fast against him. The former three times SA amateur lightweight champion has massive talent, but it does match his accomplishments. Magagane will take on Itumeleng Tsholo over eight rounds.

Meanwhile, it will be interesting to see who emerges victorious between Shaun Potgieter and Jean Pierre Steenkamp in their heavyweight fight. There is a revived interest in that weight division after Juan Roux’s victory over defending SA champion Tian Fick last month.

There are only four contenders and surely the winner on Sunday will earn a rating. There will be four more bouts, and that is according to the programme.

Action is scheduled to begin at 2pm.

Luyanda Kana will forever be grateful to Makhenkesi Stofile and Thabo Mbeki because he says he was acknowledged by the duo for his sterling job as a ...
Sport
6 months ago

Two influential boxing personalities in East London have condemned what they referred to as unruly behaviour by a fan who christened the Gauteng ...
Sport
6 months ago

Thabiso “The Rock” Mchunu and his camp, led by trainer Sean Smith, jet out tonight to Mexico where he will close off preparations for the biggest ...
Sport
6 months ago
Next Article