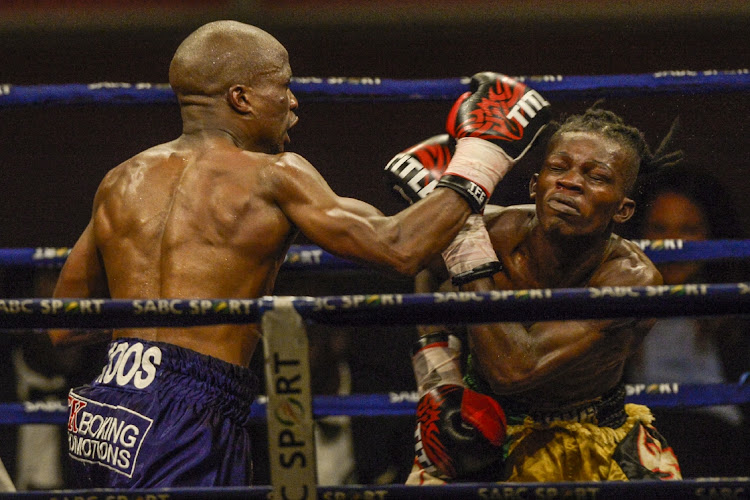 The show – ESPN’s first boxing tournament in Africa – goes on as scheduled for tomorrow night in Fourways. The assurance was made yesterday by Sifiso Shongwe, who allayed fears of a possible cancellation after the main bout dropped out.

“There is no need for the long face; the damage is done and what matters now is the way forward,” said the man who trades under the banner Walt Disney Africa. “Quickly I had to move.”

Shongwe announced that the international 10-rounder between Koos Sibiya and Steven Bagwasi from Botswana will now be the main attraction. The promoter paid tribute to Boxing SA’s Gauteng provincial manager Lehlohonolo Ramagole for being helpful.

“All what matchmaker (Abbey Mnisi) did was to get us a four-rounder so that we are within the required number of rounds for the tournament to happen,” he said. “I cannot allow one bout to affect the whole show; other boxers and trainers worked hard and we must make sure that we make them feel important too.

“Our  arrangement with Okolo and his team was that they arrive here on Sunday. Tickets and hotel were already booked for them and I sent all that information to trainer Mzwandile Sidina. What happened from thereon I have no idea until I was informed by friends about a story written somewhere that this boxer has gone missing.

“We attempted to make a contact with Sdina but we hit the brick wall because his mobile was constantly off. I hope that Okolo is okay; there will be a next time.”

Sibiya has been given the opportunity to headline a show. The battle-scarred veteran of 44 fights from a career spanning 22 years has held the WBF Africa featherweight and Gauteng and ABU junior lightweight titles.

He should overwhelm Bagwasi with his experience. Bagwasi has six wins against a loss.

The main supporting bout will be the eagerly awaited clash between Gabisile Tshabalala and Ellen Simwaka from Malawi.

The two have been on each other’s throat since August last year. There will be four more under-card fights and action will begin at 7pm.

Luyanda Kana will forever be grateful to Makhenkesi Stofile and Thabo Mbeki because he says he was acknowledged by the duo for his sterling job as a ...
Sport
6 months ago

Boxing SA is fully behind the emerging trend of celebrity fights and exhibitions bouts.
Sport
6 months ago

Tshabalala has previously held the SA and WBF junior featherweight belts. She will meet Simwaka in an international non-title fight.
Sport
6 months ago
Next Article