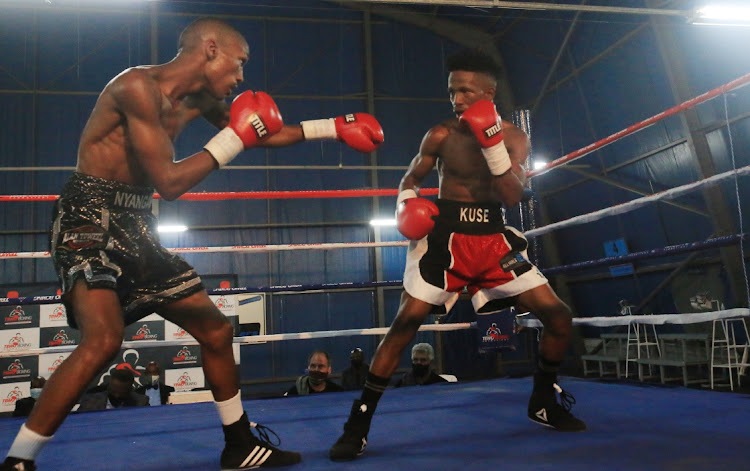 Bangile Nyangani during his clash against Siyakholwa Kuse in East London on Saturday.
Image: Sino Majangaza

While the British Boxing Board of Control has suspended tournaments under its jurisdiction for the month of January due to growing positive cases of Covid-19, Boxing SA will have its first tournament on January 27.

It is scheduled to take place in Paulshof, Johannesburg. The tournament – to be headlined by a 12-rounder between SA mini-flyweight champion Bangile “Showtime” Nyangani and mandatory challenger Thembelani Okolo, will be organised by the Walt Disney Company Africa under the stewardship of Sifiso Shongwe.

The card will mark a first for Shongwe, whose seven-bout bill will be televised by ESPN Africa (DStv 218, Starsat 248), South America as well as several broadcast partners across the globe. Shongwe said they had planned for 12 tournaments in SA this year.

Kyle de Klerk, Walt Disney Company Africa director of sport, said: “We want to give local and African boxers a platform to be seen internationally. That is our intention. We want give them as much exposure as possible so that their talent can be seen by a global audience. We are excited about the upcoming ESPN Africa boxing tournaments set to take place on the last Thursday of every month from January 27.

“For the first time on ESPN there will be  an SA title on our show. In our main event Bangile Nyangani will make his first SA title defence against Thembelani Okolo. The rest of the card features well-matched  bouts which aim to keep audiences entertained and on the edge of their seats.”

We look at some boxers that could – if given fair opportunities – set boxing on fire this year.
Sport
2 weeks ago

Nyangani failed in his first attempt to become the pride of the country when he fell short against then champion Siphamandla Baleni in 2017. Nyangani lacked experience at that time. The fight against Baleni was his fifth and first 12-rounder against a former WBA Pan African and IBO Intercontinental champion who was involved in his 15th fight.

Nyangani relocated to Jozi where he teamed up with Alan Toweel Junior in 2018, and together they chalked up six wins, three by short route, and a draw before being approved to challenge Kuse. The fight on January 27 will also be Okolo’s second chance at the domestic title. He, too, failed to dethrone Baleni in 2017. Okolo, from Gqeberha, had been inconsistent until he won the minimal WBA Pan African belt in 2019.

With trainer Caiphus Ntate barking instructions in his corner, Okolo stopped Ndikho Magadaza within the scheduled 10 rounds distance, and looked even better in the first defence by knocking out  Phumlani Maloni in eight rounds in a fight that took place at Nangoza Jebe Hall in Gqeberha on July 24 last year.

That was Okolo’s sixth KO in 10 wins against five losses and a draw. He challenges Nyangani, who also has left six of his victims counting the stars in 11 victories, a loss and a draw. Nyangani and his 32-year-old opponent are evenly matched in terms of power and experience. It will be anybody’s fight.

Meanwhile, Koos Sibiya is pencilled down for a 10-rounder with Steven Bagwasi in what will be the main supporting event to the Nyangani-Okolo clash. Sibiya, from Mpumalanga, is  coming off a stoppage loss  to Yauheni Dauhaliavets in Russia on September 9. Sibiya is a veteran of 23 wins from 44 fights, while Bagwasi, from Botswana, is a novice of six wins from seven fights. Sibiya, 40, should be too experienced for the 27-year-old newcomer whose only loss was to hard-hitting Ayanda Nkosi in Durban in 2018.

Attention will also be given to Gabisile “Simply the Best” Tshabalala – the former SA and WBF junior- featherweight champion – who seems to have lost the mojo that once demanded attention every time she fought. Tshabalala, from Evaton in the Vaal, where she is trained by Elias Mpembe, will face Ellen “Tigress” Simwaka over six rounds in the featherweight division.

Right now there is no fighter you can point a finger at and say he is the next world champion after Moruti Mthalane and Zolani Tete purely because ...
Sport
2 weeks ago

They were supposed to fight at Booysens Gym on September 15 but Tshabalala had to pull out after testing positive for Covid-19.  She recovered and went to Durban where she gave a below-par performance in the defeat to Asandiswa Nxokwana. That was Tshabalala’s third consecutive loss since she last recorded a win in 2017 against Matshidiso Mokebisi.

Simwaka, the former WBF Intercontinental bantamweight champion from Lilongwe in Malawi, has not seen competitive action for a while. Her last fight was in 2020 when she forced a stoppage over Melissa Miller. While Tshabalala has 10 wins from 16 outings, Simwaka has won eight of her 15 fights.