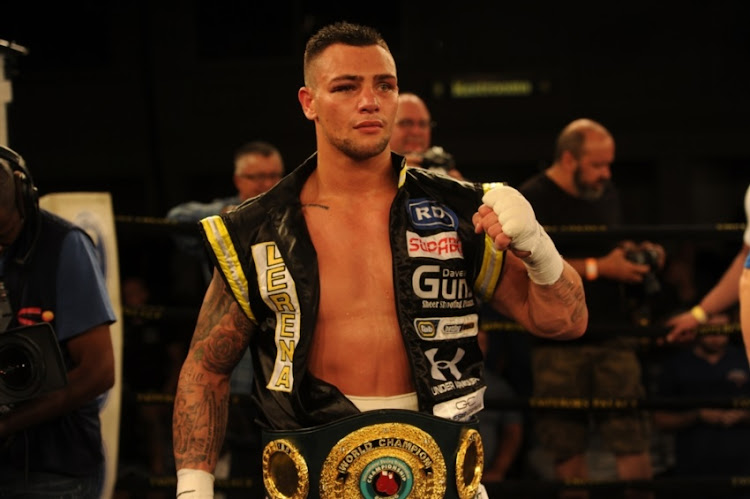 Kevin Lerena will make his debut in the heavyweight division against Romanian Bogdan Dinu for the WBA Intercontinental title at Emperors Palace on February 26
Image: Gallo Images

The nation's boxing lovers have been urged to rally behind Kevin “Two Guns” Lerena as he continues his journey to the heavyweight ranks.

Lerena is an accomplished former highly rated IBO cruiserweight undefeated champion and chalked up six successful defences of his crown. The former horse racing jockey, who had no amateur background in boxing but won the WBF Africa and WBA Pan African belts, will make his debut in the heavyweight division against Romanian Bogdan Dinu for the WBA Intercontinental title at Emperors Palace on February 26. The eagerly awaited fight will be staged by Golden Gloves.

“I want to do it for SA. I want to shock the world and, mark my word, I will become a well-known heavyweight in the boxing world,” said the left-handed fighter, whose skills are polished by ex-heavyweight fighter Peter Smith.

Lerena said SA heavyweight boxers do not get recognition and this is despite the fact that world champions Gerrie Coetzee (WBA) and Corrie Sanders WBO) came from this part of the globe. Coetzee beat highly rated American Michael Dokes to win the title while Sanders defeated Wladimir Klitschko.

Coetzee’s 10th round knockout victory was KO Magazine’s Upset of the Year in 1983, while Sander’s knockout win against Klitschko was considered one of the biggest upsets in heavyweight boxing history. The Ring magazine, which is regarded as the Bible of boxing, named it the Upset of the Year in 2004.

Lerena is rated No 29 in the world in the heavyweight division without lacing his boxing gloves in that weight class. The boxer said he wants to make a statement in the division.

"I want to be explosive," he said.

Getting beaten badly the first time he wore boxing gloves during a sparring session made Rick Rex hate the sport.
Sport
2 months ago

"[I have] a big task ahead of me. It is a risk, however, [but] one I am willing to explore. I weigh around 102kg and I believe you will see an explosive and very strong Kevin Lerena [against Dinu in February]. There is no weight cutting. I am here to shock the world. I want do it for SA.”

Dinu will be Lerena's first fully fledged heavyweight opponent and the South African recognises he will face harder punches than he has had to contend with in his career.

“The heavyweight division is the pinnacle of boxing," he said.

"It’s a tough task ahead but I believe my trainer Peter Smith can install the skills in me to do my best in the division and shock the world by becoming a heavyweight world champ. Many pundits are going to ask why have I moved up to the heavyweight division.

"I believe I am pugilist specialist who knows what I have to do to beat the big men. I focus my boxing on my skills. I may not have the same knockout power like [the bigger boxers in the heavyweight division], but I believe I am going to bring something different to the table, and that is speed, tenacity and brains.

“These guys are big punchers, but if you can avoid those big punches, make them look stupid and make them pay, you will be victorious. You have to be elusive and if you stand the pipeline against these big men, you are going to get hit to pieces. But if you evade these guys, move to the side, use angles, and use the ring, you can turn it into a tough night for them because they are big and slow.”

Dinu has 20 wins, 16 knockout with three losses to his name.

“I’ve got to beat this guy and get a big ranking from the WBA,” said Lerena, who has 13 knockouts in 26 wins against a loss [he later avenged the defeat to Johnny “The Hurricane” Muller].

“I want to do a job on him [Dinu], put him away and show the world I am here. I want to make a statement in the heavyweight division.”