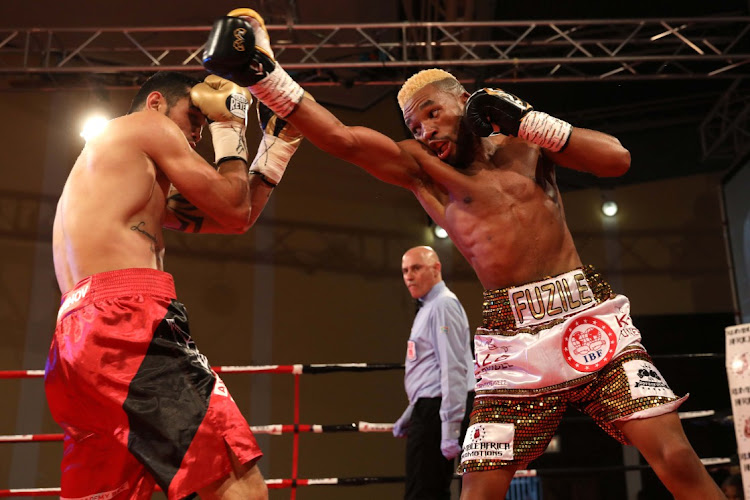 SA lightweight champ Tshifhiwa Munyai yesterday described Azinga "Golden Boy" Fuzile as the complete package whose ring IQ could turn the potentially tricky fight against Kenichi Ogawa in New York on Sunday into an easy bout. They will fight for the vacant IBF junior-lightweight title.

It is a difficult concept for a casual fan to grasp but seasoned observers can quite easily identify ring smarts. There is a strategy and thinking in boxing, which is mostly about speed and timing.

Some say it is about pounding the body hard then feinting to the body, while others say that must done in the same motion, crashing a punch to the jaw. It is where the talent lies in boxing.

Fuzile ticks all those boxes. He stopped Munyai in three rounds in 2017, and Fuzile’s corner during that fight was manned by Colin Nathan. The boxer had left long-time trainer and homeboy in Duncan Village Mzamo “Chief” Njekanye.

“The Fuzile that fought and beat me was not brilliant,” Munyai observed. “Colin added what he needed, and Azinga is now a complete package.”

Munyai feels that the hard hitter who dropped him twice in their fight stands a good chance of taking the title on Sunday. Nathan remains Fuzile’s manager.

Njekanye, who was in the corner when Fuzile won the rights to challenge for the world title by knocking  Martin Ward out in the seventh round in their elimination fight in the US in May, will be assisted on Sunday by Sean Gibbons, the American who is president of Manny Pacquiao Promotions. Jorge Capetillo, who runs the busiest boxing gym in Las Vegas, will be the cut man.

In the main event WBA Super, IBF and WBO lightweight champion Teofimo Lopez will defend against George Kambosos. Both fighters are undefeated.

Lopez, the US, boasts 12 knockouts in 16 wins while Kambosos, from Australia, has won all 19 of his contests – 10 by knockout.

Zolani Tete will make his comeback on December 12 at Booysens Hall in Johannesburg. This was announced yesterday by the former world champion’s ...
Sport
2 months ago

Vibrant boxing manager Vus’Umuzi Malinga is breathing a sigh of relief and feels vindicated for lodging a formal complaint with Boxing SA (BSA) after ...
Sport
2 months ago

Legendary Dingaan Thobela – a retired two-weight world boxing champion  – is disappointed by the deafening silence from the government in not ...
Sport
2 months ago

Trainer Sean Smith has cleared up the mystery that was caused last week by the WBC in its statement quoting president Mauricio Sulaiman saying his ...
Sport
2 months ago
Next Article