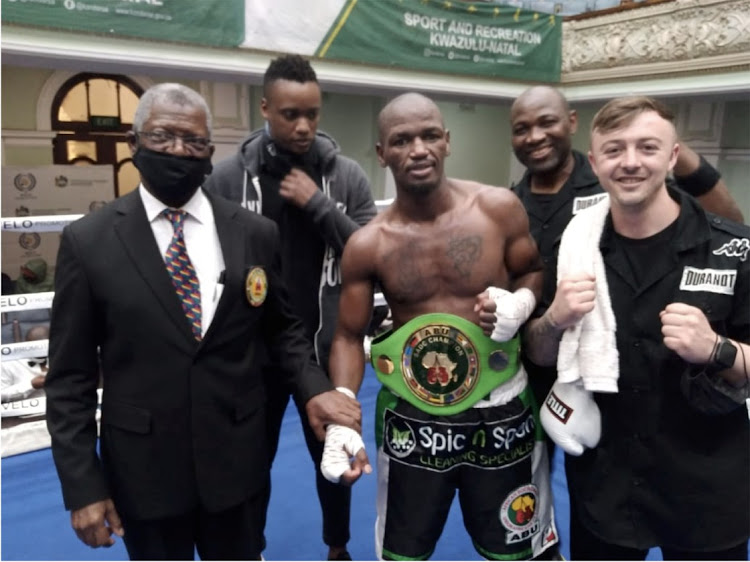 Marcus “King Labamba” Lebogo finally has a crown. His deserved unanimous points win after one-sided 10 rounds against Sbonelo Nzimande at the weekend was testimony to the old saying that perseverance is the mother of all success.

Lebogo failed to win the SA junior welterweight title from Xolani Mcotheli in 2019 but never gave up. The crowning moment came on Sunday and the boxer from Tembisa grabbed it with both hands as he completely flummoxed Nzimande to win the ABU SADC belt.

Lebogo has been a professional boxer since 2012 with nothing to show for it. He was a broken man after losing to Mcotheli but trainers Damien Durandt and Andson Kazembe did not give up on him. Instead they brought him back on June 26 and he defeated Xolani Mgidi over six rounds.

That win restored Lebogo’s confidence and it showed in his fight at the Civic Centre in Pietermaritzburg on Sunday. The fight headlined the eight-bout card of promoter Nomvelo Shezi.

“Please allow me to enjoy the moment,” said the jubilant champion yesterday.

“I dedicate this title to my family – my three children, their mother, my mother but more specially my father who has been behind my career from day one.

“These are the results of what he has put in. I am also proud to raise the flag for Tembisa. Credit to TLB promoter Joyce Kungwane for bringing me back. Thank you to my stable mates for their assistance and gratitude to my coaches – Damien and Kazembe.”

Durandt and Kazembe have now produced 17 champions since taking over the training of fighters from Durandt’s father – the late Nick Dudandt.

“I am proud to see him capture the belt. I gave him the ultimatum that he wins this title or he quits because I was not prepared to allow Marcus to become a stepping stone for other boxers,” said Damien Durandt. Scorecards read 97-93 (twice) and 99-91.

Earlier on former nine-times Sanabo champion Nomusa Ngema had fans on their toes as she literally demolished Lufuno Matshayi in less than a minute. This was the first boxing tournament to welcome fans back. They came in big numbers and one of them was Duduzane Zuma.

Luthando Jack is a man of honour. Jack and his six colleagues were appointed as BSA's board in December last year with a term ending in 2023.
Sport
2 months ago

Confidence in someone outperforming the other can be proven in more ways than one. But successful boxing trainer Damien Durandt has instead ...
Sport
2 months ago

Young boxing promoter Cyril “The Black Chinese” Lehong’s cancellation of Sunday’s international tournament at Booysens Hall has opened him up to ...
Sport
2 months ago

Thato Bonokoane’s last boxing fight on January 23 was for the WBO Oriental junior-lightweight title. He lost by a ninth-round stoppage to Asrov ...
Sport
2 months ago
Next Article