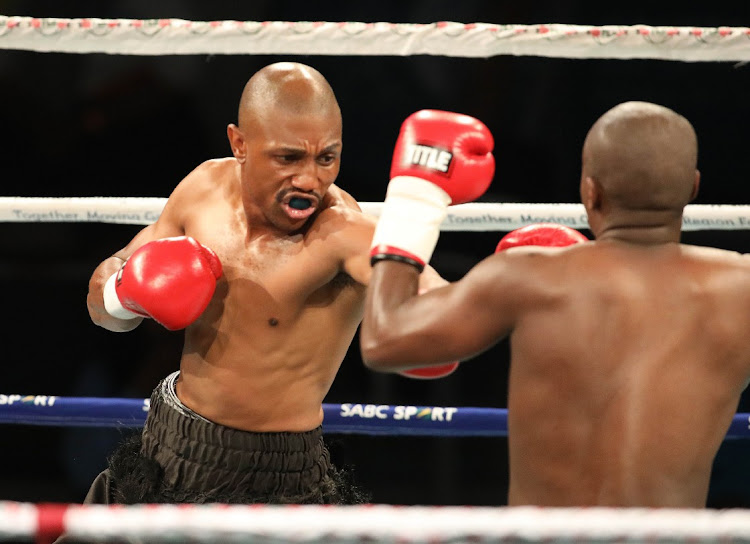 Thato Bonokoane lands a punch against Doctor Ntsele during their bout at the Klipspruit Sports Centre,Soweto.
Image: Veli Nhlapo

Thato Bonokoane’s last boxing fight on January 23 was for the WBO Oriental junior-lightweight title. He lost by a ninth-round stoppage to Asrov Vokhidov in Russia.

Victory for Bonokonae would have been historic.

He is back in action on Sunday, this time for the lesser recognised WBF All Africa title. The significance is that it could determine his future in the fight game.

Defeat against Mfundisi Ngema at the City Hall in Pietermaritzburg could relegate Bonokoane to being a permanent undercard fighter who is brought on just to complete boxing programmes.

But victory against tough-as-nails Ngema, from Esikhawini in KwaZulu-Natal, will not only get the attention of the WBF championship committee but will also qualify Bonokoane to face SA champion Ayabonga Sonjica in Rumble Africa’s tournament on November 28 in East London.

“This is one fight I can’t afford to lose. I am not saying this to disrespect Mfundisi,” said Bonokoane yesterday. “It is simple – swim or sink for me. If Mfundisi kills me for the title then so be it. This is the biggest fight of my career.

“God is giving me the chance to resurrect my career so that I reclaim by position among the top boxers in the country in my division.”

“I need to prove to myself and my followers that we are still on course for bigger things,” said the soft-spoken fighter.

“I also must prove that the loss was just a speed bump; we are back to continue where we left off when we knocked out Doctor Ntsele in Soweto in October. I know that Ngema will try hard to push me and take me out but I am ready for anything. I hope he will also be willing to take it when I give back to him.”

Bonokoane will be making his debut under trainer Charity Mukondeleli, after the death in July of trainer Lehlohonolo Ledwaba. Mukondeleli knows Ngema like the back of his hand. He trained him and also manned his corner when Ngema won the WBF International title in Botswana in 2019.

Mukondeleli said: “Our preparations have gone well. Thato has good sparring with Ronald [Malindi, who boasts a win over Ngema]. Thato also worked well with Tsiko Mulovhedzi who is to make a comeback before the year ends;  they have been pushing each other. Look, Thato will reclaim his belt.”

Boxing SA has confirmed on Monday that fans can return to arenas for matches.
Sport
3 months ago

Colin Nathan has been vocal about his fighters contesting minimal titles but explained what forced him to support Hedda Wolmarans in her fight for ...
Sport
3 months ago

Ricardo Malajika will not hear the bell going for the 10th and last round of their rematch at Emperors Palace on December 11, warned Sabelo “The ...
Sport
3 months ago
Next Article