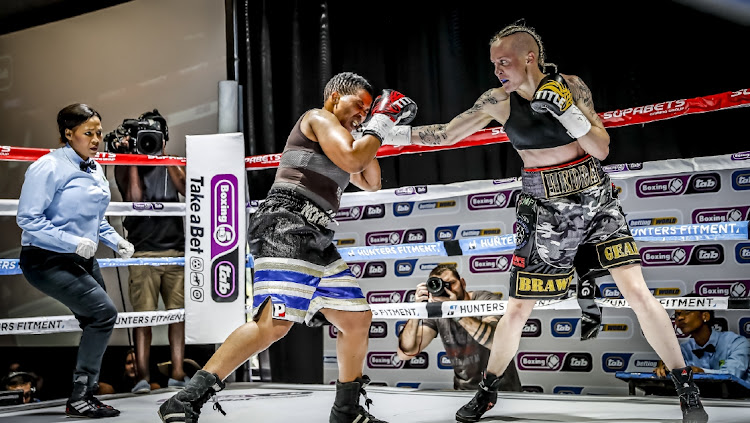 Ndobayini Kholosa and Hedda Wolmarans exchange during their topsy-turvy fight that had fans on the edge of their seats. Wolmarans beat Kholosa.
Image: Nick Lourens

Colin Nathan has been vocal about his fighters contesting minimal titles but explained what forced him to support Hedda Wolmarans in her fight for the WBO International junior-welterweight belt.

The national champion who goes by the moniker “The Shredder” will welcome Zimbabwean Chiedza “The Queen Tiger” Homakoma for that title. Their 10-rounder will headline Uppercut Promotion’s card at Booysens Boxing Arena in Johannesburg on October 24.

“Obviously we are going to work with various legitimate world boxing bodies. Victory against Chiedza, which I expect anyway, will push her ratings and ultimately pave way for her to eventually fight for the legitimate world title.”

A number of local boxers have previously held WBA, WBF, IBF, WBF and IBO All Africa, International, Continental and Intercontinental, ABU and ABU SADC titles but only a handful benefited from holding those belts by getting chances to fight for legitimate world titles.

Nathan’s charge Hekkie “Hexecutioner” Budler is a lucky fighter whose three defences of the IBO All Africa junior-flyweight title he won after defeating Charity Mukondeleli in 2009 made it easier for promoter Rodney Berman to convince the championship committee of the IBO to give Budler a chance to fight for the actual world title.

Budler won it in 2010 and added the mini-flyweight strap in 2012. His consistency enabled him to fight for and win both the WBA and IBF junior-flyweight titles simultaneously. His achievement earned him the Ring Magazine belt. Other minimal titles are just good in the face of fans and are wonderful to those sanctioning bodies that make money through sanctioning fees.

The WBO – which was represented is SA by Cliff Dikeni after its formation in 1988 in Venezuela – has had only three South Africans holding its world title. Dingaan “The Rose of Soweto” Thobela won its lightweight belt in 1990, Corrie “The Sniper” Sanders captured the heavyweight title in 2003 and Zolani “Last Born” Tete was crowned bantamweight holder in 2017.

This country is yet to produce a WBO female champion. Nozipho Bell was unsuccessful in her attempt to wrest the junior-lightweight belt from Ewa Brodnicka in Poland in 2018.

Wolmarans and Chiedza are evenly matched. While the South African has six wins, four by stoppages, the Zimbabwean has also floored four of her five victims. Wolmarans's stablemate, former IBO mini-flyweight holder Simpiwe “Larhastile” Konkco will be in action in an international non-title fight in one of the undercards

Konkco, who last fought in 2019, losing to then WBC champion Chayaphon Moonsri, will welcome Filipino Jonathan Almacen, who gave Budler hell to lose by points in their WBC Silver junior-flyweight title on May 22.

Ricardo Malajika will not hear the bell going for the 10th and last round of their rematch at Emperors Palace on December 11, warned Sabelo “The ...
Sport
1 month ago

Hard-hitting hot prospect Roarke “Razor” Knapp is going to get knocked out by Brandon “Fast Guns” Thysse in their tantalising rematch at Emperors ...
Sport
1 month ago

Deontay Wilder can reclaim the WBC belt and actually go as far as to unify the division. But I am convinced – after his 11th-round knockout by Tyson ...
Sport
1 month ago

SA has not had a decent heavyweight boxer to hold his own against the best in the world. This country, however, has had world champions in Gerrie ...
Sport
1 month ago
Next Article