Fans get value for their money 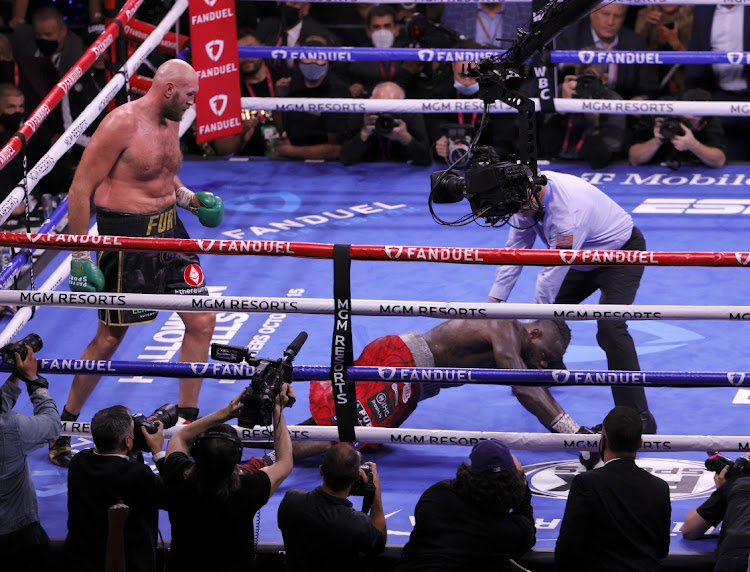 Tyson Fury (L) knocks out Deontay Wilder as referee Russell Mora looks on in the 11th round of their WBC heavyweight title fight.
Image: Ethan Miller

The reaction from the fight fraternity and media to the third instalment of an epic heavyweight championship fight in which both WBC champion Tyson Fury and challenger Deontay Wilder went down multiple times in Las Vegas on Sunday morning is nothing but huge respect to the two fighters.

The fight attracted about 16,000 fans inside MGM Grand Garden. They promised each other destruction and they certainly delivered. Wilder ultimately succumbed to Fury’s furious and savage power in the 11th round.

Gauteng boxing trainer Sechaba Mabuya – whose boxing-crazy family was torn in two (him tipping the “Gypsy King” to knock out Wilder in the later rounds, with his wife and boxing promoter Nomakhosi and their son Tumelo, who is a religious boxing follower, backing “The Bronze Bomber”) – said he was relieved the fight is over.

“I cannot show my feelings, though. This is my family, after all. But at least I am off the hook in terms of paying the fine; I was going to pay a fine had Fury lost. My son never slept at all, and he woke me up at 3.30am to be early to watch the fight. Tumelo and his mother are disappointed but at least my boy did not cry this time around.”

A Wilder fan, 13-year-old Tumelo said: “I am not that disappointed. It is good because Fury said he would do it in round seven but he did it in round 11.  Look, they both kissed the canvas. Fury got dropped twice and Wilder three times. I can’t describe the brutality of Fury’s right hand to the ear of Wilder which ended the fight. He’s still my man, though."

The fight was a back-and-forth slugfest from round three. Fury connected with a left hook and a right hand to send Wilder face-first to the canvas in round 11.

American referee Russell Mora did well to rescue Wilder from total destruction by stopping the fight. Fury led on all three scorecards 95-91, 94-92 and 95-92 at the time of the stoppage. The champion got paid a whopping $30m (about R447m) with Wilder taking home $20m (about R298m).

Beaten Wilder has no plans to retire, says trainer

Deontay Wilder has no plans to retire, the American boxer's trainer Malik Scott said, after he was knocked out by Briton Tyson Fury in their WBC ...
Sport
9 months ago

Tyson Fury won a slugfest with Deontay Wilder with an 11th round knockout to retain his WBC heavyweight title at T-Mobile Arena in Las Vegas on ...
Sport
9 months ago

It is often said that football is the most powerful and most popular sport in the world, linking communities, stirring emotions and breaking down ...
Sport
10 months ago
Next Article