Gypsy King v The Bronze Bomber, who will win? 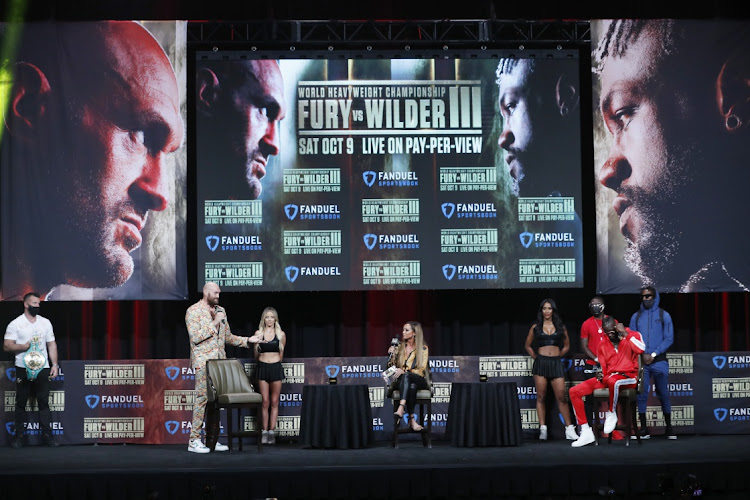 It is often said that football is the most powerful and most popular sport in the world, linking communities, stirring emotions and breaking down cultural barriers.

But it looks like of late boxing, on a very small scale, is gradually giving tit-for-tat with local fans, especially in bouts between big international stars. A case in point is the eagerly awaited third heavyweight title instalment between Tyson Fury and Deontay Wilder at T-Mobile Arena in Las Vegason Sunday. The duo command huge support here and their trilogy has split the boxing crazy family of top Gauteng trainer Sechaba Mabuya.

Mabuya has tipped “The Gypsy King” to retain his WBC title against Wilder in Las Vegas –  the same city known primarily for gambling – where the 35-year-old Wilder succumbed to the Englishman’s fury in seven rounds of their second fight on February 22 last year.

Mabuya’s wife Nomakhosi – a Boxing SA licensed promoter – and their13-year-old son Tumelo are convinced that “The Bronze Bomber” will reclaim the green and gold belt he lost at MGM Grand Garden.

“Look, there is a sporting tension in our house,” said Sechaba yesterday. “My wife and my son are backing Wilder to win. I just hope that Tumelo doesn’t cry after the fight because that is what he does when a boxer he favours loses. He would cry when my boxers, especially Anthony Moloisane, lose a fight because he takes it personally.

“Tyson has superior skills and a big heart. He can also fool you around and then knock you out when you least expect it.”

The 33 old former WBA, IBF, WBO and IBO champion has 21 knockouts in 30 wins against a draw.

But Tumelo and Nomakhosi were in disagreement.

“People base their opinions on the outcome of the second fight, which Fury won by a knockout,” warned Tumelo who said he watched tapes of Wilder in training. “He looks lean and mean and he gave me an impression that he is going in there for a knockout. There will be no tears at all at the end.”

Said Nomakhosi: “His right hand is very dangerous and will end it all within 12 rounds.” Wilder’s right hand has left 41 of his 42 victims counting the stars.

Fury is quoted by BadLeftHook.Com saying: “I’m looking to let off some steam and get a good fight in, and I’m hoping Deontay Wilder brings a good game, makes me think, makes me work hard for my victory. But if not, I’ll totally steamroll him, and that’s just how it’s going to go. I think he’s improved as a fighter, maybe, but if he hasn’t improved, I’m up 40 or 50 percent from what I was (before). I’m expecting an improvement (from him), and if he hasn’t improved, then it should be a really easy night.”

Wilder responded: “Everyone knows I have power and my power never diminish from the 1st through the 12th. But I want to show a little bit more. Like I said, I’m gonna beat him up and I’m gonna knock him out. We’ve been working on everything. We haven’t left no stones unturned.”

Phikelelani Khumalo has quit football, the sport where remuneration is not determined by an appearance, and joined the fisticuffs sport.
Sport
10 months ago

Treatment of licensees by the Boxing SA board is divisive and their actions are causing hostility among them, says Gauteng Boxing Promoters ...
Sport
10 months ago

The Boxing SA (BSA) board has accepted Cindy Nkomo’s resignation as its director of operations and acting CEO but persuaded her to stay on until the ...
Sport
10 months ago

Cindy Nkomo’s resignation as director of operations and acting CEO of Boxing SA is a huge loss for boxing in terms of administration, says CEO of ...
Sport
10 months ago
Next Article