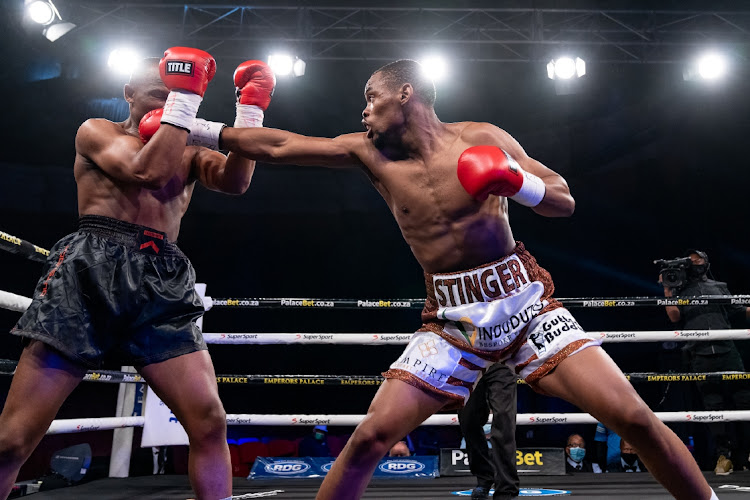 Former professional footballer Phikelelani Khumalo, right, and Thando Mali in action at Emperors palace where Khumalo won by a KO in round two.
Image: James B Gradidge

Phikelelani Khumalo has quit football, the sport where remuneration is not determined by an appearance, and joined the fisticuffs sport.

The former striker for Golden Arrows and Maritzburg United in the MultiChoice Diski Challenge made an immediate impact in boxing since fighting his first professional match in December last year.

The left-hander - from Mthwalume, south of Durban - has his fighting knacks polished in Edenvale, Ekurhuleni, by successful yet unheralded trainer Vusi Mtolo.

He said the transition from football to boxing had been smooth. “I knew that God does not make mistakes. It’s been fun, at the same time shocking. Sometimes I don’t believe that I have been able to adjust in such a small space of time. I now believe that anything in life is possible only if you believe in yourself and focus on what you want to do.”

Khumalo remains undefeated after four fights. He stopped Lukhangela Jamjam in the third round of what was his first pro fight. Khumalo followed up with a points decision against Chris Gouws on June 19 at Emperors Palace, where he also violently knocked out Thando Mali in the second round last month.

“Had I stayed in football I would probably be very unhappy, so I decided to quit and focus on boxing,” he explained. “I began training as a boxer while still playing football. I had one fight in the amateurs. I immediately felt I am right in the sport,” he said, adding that the first trainer he joined specialised on fitness training.

“He advised me to contact Vusi Mtolo in Johannesburg. I then did as advised and Vusi suggested that I come up to Johannesburg for sparring so that he can have a look at how I handle myself.”

Like any other supportive father, Mlindelwa Khumalo accompanied his son to the bright lights of Johannesburg where he had a sparring session under the watchful eye of Mtolo.

“I think Vusi was impressed because he made sure that I got a BSA boxer’s licence,” he said.

Treatment of licensees by the Boxing SA board is divisive and their actions are causing hostility among them, says Gauteng Boxing Promoters ...
Sport
2 weeks ago

The Boxing SA (BSA) board has accepted Cindy Nkomo’s resignation as its director of operations and acting CEO but persuaded her to stay on until the ...
Sport
3 weeks ago

SuperSport United captain Ronwen Williams has shared the conversation he had with Thamsanqa Gabuza at the beginning of the season and how it has ...
Sport
2 weeks ago

Thabiso Kutumela has been cleared to travel with Bafana Bafana to Ethiopia today for their 2022 Qatar Fifa World Cup qualifier at Bahir Dar Stadium ...
Sport
2 weeks ago

Bafana Bafana defender Siyanda Xulu has warned his teammates to guard against complacency when they face Ethiopia in the back-to-back 2022 Qatar Fifa ...
Sport
2 weeks ago
Next Article