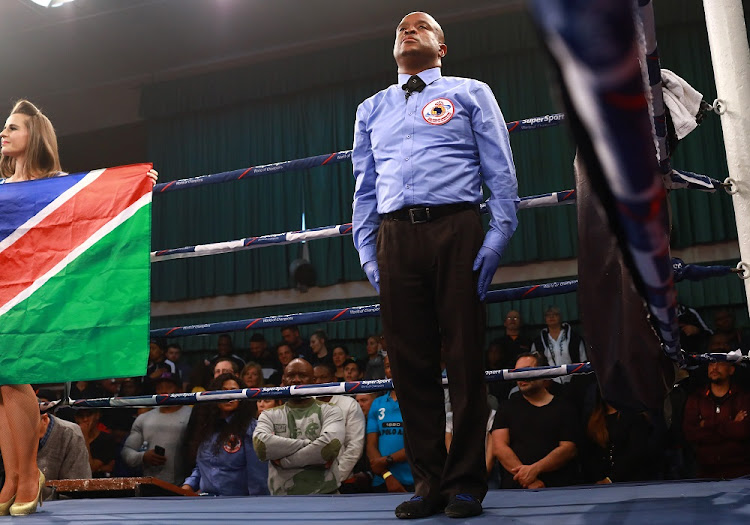 Referee Simon Mokadi has been slated for his handling of the fight between Prince Dlomo and Siseko Makeleni.
Image: Masi Losi

The Eastern Cape boxing fraternity does not easily warm to outsiders. One person who has constantly come under attack from them is Gauteng referee Simon Mokadi.

Mokadi became even more unpopular in those parts after his debatable conduct during the 12-rounder between Prince Dlomo and Siseko Makeleni, which Dlomo contentiously won by a split points decision at Booysens Hall in Joburg on Sunday.

Calls were made on social media for Boxing SA to suspend Mokadi. That was because he docked Makeleni three points for what he said was deliberate and constant holding when he had warned him to stop doing so.

From a distance it looked like Makeleni was clinching, which is a legal and effective defensive technique whereby a boxer leans on and wraps up their opponents' arms to create a pause. It is allowed but for short periods before the referee breaks it up. But Mokadi was closer to the action.

One man who wanted his feelings known publicly is Xolisani Ndongeni, the outspoken former IBO and WBF champion from Duncan Village. He accused Mokadi of self-aggrandisement.

“Either he wanted to stamp his authority unnecessarily or he wanted to destabilise Siseko and take him out of the fight, and I would not know why,” said Ndongeni. “You can’t just jump between boxers and take a point three times when you have not warned him. That is pure abuse of power. Clearly he does not know that clinching is allowed. Prince was also doing what Siseko did, so why did Mokadi not take away a point from him?”

When contacted, Mokadi said: “People must get footage of that fight and watch it. Also the warning, I gave him the chance hoping that he will stop it. I then decided to take a point in round four. He would hit and hold, which means he does not want to his opponent to hit him. I did everything right and I am not guilty of anything. I nearly disqualified him.”

Mogale Molefe gave an astounding performance against Sinethemba Kotana over eight fiercely contested rounds. Molefe, from North West, was not given even the slightest of chances against the talented Kotana, from the Eastern Cape, but almost upset the applecart.

Nathan not happy with scoring in Kurnet's loss to Gingqi

The tournament – an eight-bout card evenly matched by Abbey Mnisi  – was promoted by the Gauteng Boxing Promoters Association.
Sport
4 weeks ago

Anthony Joshua's stunning defeat to Ukraine's Oleksandr Usyk means there is unlikely to be a world heavyweight unification fight between Britons ...
Sport
4 weeks ago

Kunert can fulfil his jailhouse promise

Winning the SA boxing championship belt on Sunday afternoon will fulfil the commitment made by Abdzul-Aziz Kunert in 2014, when he walked out of ...
Sport
1 month ago
Next Article