Moyo swears Dladla's a changed man ahead of title defence 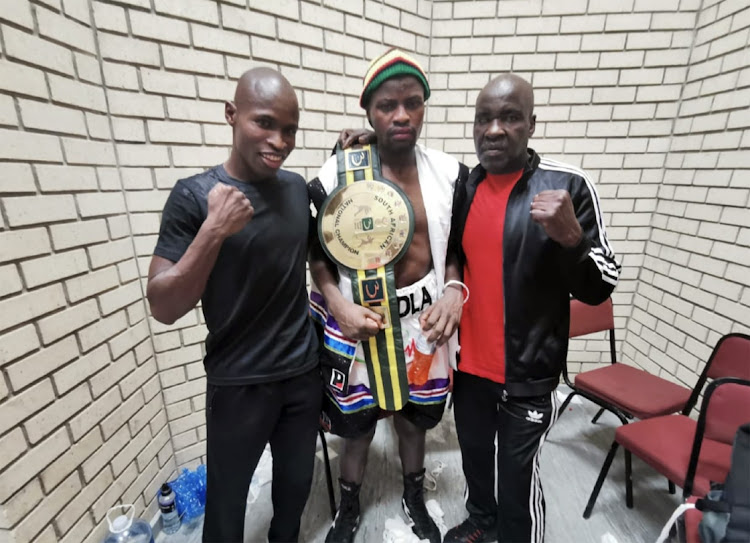 Perhaps Simon Dladla realised after getting knocked out in the first round by Roarke Knapp that he was not invincible.

Dladla’s unpleasant personality has now changed for the better, according to soft-spoken trainer Xolani Moyo who Dladla dumped, along with George Khosi, after winning the SA junior-middleweight boxing belt on December 16 2019.

He became swollen-headed and probably felt he had outgrown their makeshift Hillbrow Boxing Club where he learnt about boxing from the amateur ranks before the duo knocked his raw fighting knacks into shape to be able to graduate to the professional ranks.

Dladla, from the Free State, joined the flashy HotBox Gym of Colin Nathan but was trained there by Nathan’s assistant Vusi Mtolo, who had his own boxers that trained at the gym. Two of them are Knapp and Shervontaigh Koopman. Dladla got involved in sparring sessions there and little did he know that he would oppose Knapp for the vacant  IBO Youth title.

Knapp ended it all within a minute on December 12 last year.

Dladla, who has not fought since that loss, will put the national belt on the line against Koopman on September 25 at Emperors Palace, where he tasted defeat after his six-fight winning streak that is embellished by five knockouts.

Moyo feels that Dladla is not the same fighter who bolted from their stable.

“He has learnt from past mistakes, where he was all over the place, changing gyms yet not knowing exactly what he wanted to do,” he said. “I mean, he ended up sparring with his future opponents. They knew his strengths and weaknesses, especially Roarke. He said he had only one session with Koopman.

“Like I said, there is a lot of change in personality. I sat him down and we spoke. In making sure that he did not have lots of time doing nothing, I got him a job as a personal trainer at Fight Club in Sandton.”

Regarding the conduct inside the ring where Dladla has always bullied opponents in the pursuit of an early night, Moyo said: “We’ve done adjustments and introduced new things and you will see a completely different Dladla on September 25. I promise you one thing – war – and the title is going nowhere.”

Like any licensed professional boxer who aspires to become a national champion, Smangele Hadebe will finally fight for the SA flyweight title she has ...
Sport
2 months ago

Pillars of strength in the promotion of boxing in East London have fallen and even the remnants have collapsed. Longest-surviving promoter Chris ...
Sport
2 months ago

Boxing SA’s threat of sending licensees to the guillotine for participating in activities outside the country without the clearance was yesterday ...
Sport
2 months ago

Doubting Thomasses who described Patrick Bonyeme as a fantasist when he boldly said  Youssof “The Terrible One” Mwanza would beat the favourite ...
Sport
2 months ago
Next Article