The two are the only contenders in their weight division 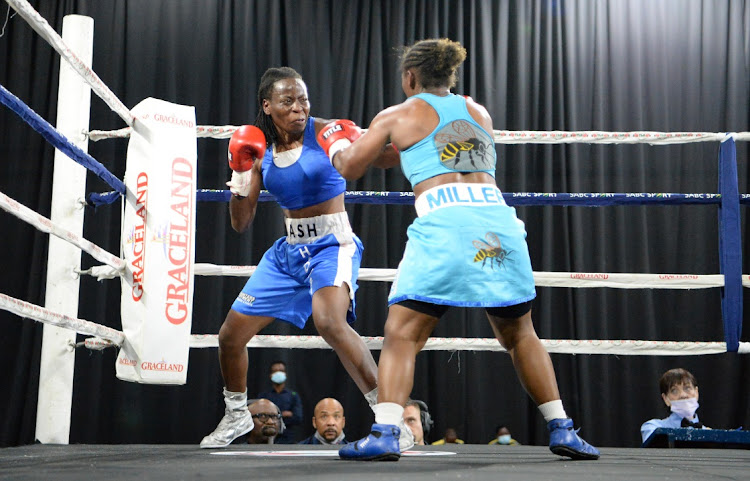 Mellisa Miller and Smangele Hadebe during the 'Return of the Big Guns' Boxing Tournament at Graceland Casino on March 20, 2021 in Secunda.
Image: Lefty Shivambu

Like any licensed professional boxer who aspires to become a national champion, Smangele Hadebe will finally fight for the SA flyweight title she has been eyeing for the past two years.

Noxolo Makhanavu – who has had endless excuses when she actually could no longer make the weight limit when was supposed to defend against Hadebe until her brush with death as she collapsed while jogging in an attempt to reduce weight – eventually vacated the title and moved up to the bantamweight class.

Authorities have sanctioned Hadebe and Thema Zuma for the vacant title, and their third meeting will form part of the 5th Elements tournament to take place at Music World, Parkview in Pretoria, on Saturday. Hadebe – BSA’s 2017 and 2018 Female Prospect of the Year award winner from KwaThema, Springs – has defeated Zuma from eDududu, a small rural area in the south coast of KwaZulu-Natal – in their previous clashes.

The fact that BSA has given them the green light to contest the vacant national title even though they will be meeting for the third time, gives a clearer yet gloomy picture about the state of affairs of women boxing in SA. They are the only contenders in that weight division.

Whoever becomes the national champion on Saturday must know that the dream of owning the SA belt will not come to fruition early. Any champion – male or female – is required to make five successful defences to earn the ownership of the national title.

Women boxing in SA is at death's door. This after scrutinising the female ratings for August. There are only two contenders – Mapule Ngubane and Lillian Molala – for the junior heavyweight vacant title. Ndobayini Kholosa is the only boxer rated in the welterweight division.

Hedda Wolmarans holds the junior welterweight belt and has not defended it since winning it in 2019 because there are no contenders.

Matshidiso Mokebisi has been the junior featherweight champ since 2017 with no defence. Sharadebe Fortuin won the bantamweight belt from Mellissa Miller last month. Hadebe and Miller are the only contenders.

Nozwelethu Mathontsi is the junior flyweight holder since 2014. Her last defence was in 2017. Even the mini-flyweight division – the smallest weight division in boxing’s 17 weight categories – does not have a single boxer listed in recent ratings.

Boxing SA’s threat of sending licensees to the guillotine for participating in activities outside the country without the clearance was yesterday ...
Sport
4 months ago

Doubting Thomasses who described Patrick Bonyeme as a fantasist when he boldly said  Youssof “The Terrible One” Mwanza would beat the favourite ...
Sport
4 months ago

Trainer Charity Mukondeleli’s star is rising. The former professional boxer is the new assistant to successful veteran trainer Norman Hlabane at the ...
Sport
4 months ago

Boxing is still complicated and dogged by the politics and infighting of the sport’s numerous sanctioning bodies.
Sport
4 months ago
Next Article