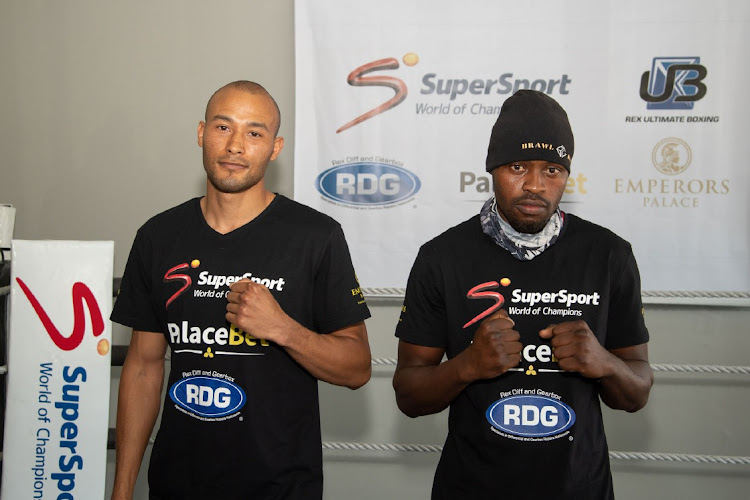 Shervontaigh Koopman, left, and Simon Dladla have promised to destroy each other for the SA junior middleweight title.
Image: James B Gradidge

Boxing SA should incentivise boxers who fight for the SA title. That is simply because their attitude shows how much they love their country when many fighters are no longer interested in becoming national champions. They would rather opt for titles that mean nothing to their careers, but a lot to those bodies that collect the sanctioning fees.

It is encouraging to hear young fighters like Simon Dladla and Shervontaigh Koopman exchanging heated verbal barbs when they talk about how much they want to win the SA junior-middleweight belt. In fact, Dladla from the Free State, who is trained by George Khosi, holds that title, which will be at stake in Golden Gloves' Triple Treat tournament at Emperors Palace on September 25.

The boxers met yesterday during the official opening of RUB Boxing Gym in Edenvale. , Dladla and Koopman once trained together under Vusi Mtolo. They sparred for two rounds, enough for either fighter to figure the other out.

Dladla won the national title in his sixth pro fight in 2019 and has not had the opportunity to defend it. Koopman's consistency in amassing seven wins earned him the No 3 spot in the ratings and it qualified him to challenge for the title, which has turned them into antagonists who promised to destroy each other on September 25.

First to fire his salvo was the 27-year-old challenger from Primrose who is still with Mtolo at RUB Gym. “I am going to be crowned the new champion and I am preparing myself for war to achieve that goal. Yes, I sparred with him for two rounds and he’s good and a big puncher, but I still say that a new champion will be crowned,” Koopman said.

Mtolo chipped in: “A lucky punch on the button can help Dladla. Other than that he is going get punished all night long.”

Dladla, 26, who is coming back from a first-round knockout by Koopman’s stablemate Roarke Knapp for the IBO Youth belt in December, said: ‘Koopman has fast hands with little power. I am excited to fight him because he is seen as the future in the division here at home and I say I am the present, so we will see who prevails. I come back from a loss where I learnt one thing, that at times it is not about you punching the other guy, but also defending yourself from what he throws at you. I will be ready for anything that Koopman brings on the table.”

Khosi said: “They look down upon us and they will pay dearly.”

Yesterday marked a day where SA made gigantic strides in boxing by hosting a WBC title fight at Carnival City in Brakpan in 2000.
Sport
8 months ago

Sibusiso “Prince” Dlomo – whose unimpressive CV of 11 losses against 10 wins confirmed him to be a journeyman – now commands respect even from his ...
Sport
8 months ago
Next Article