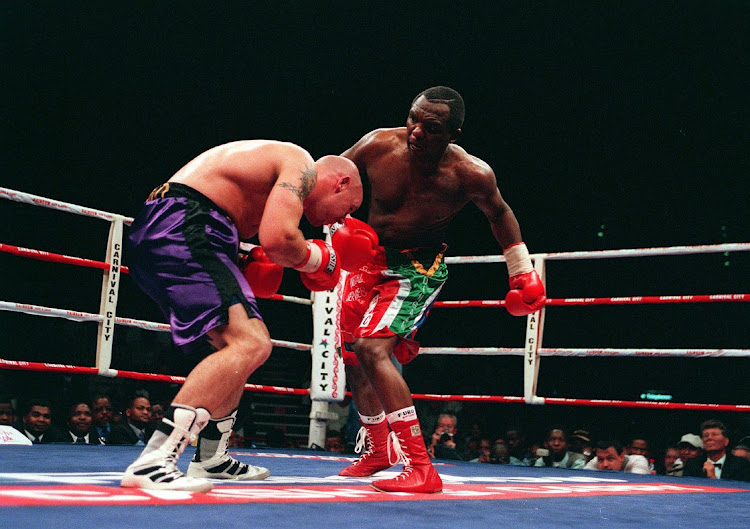 Dingaan Thobela stopped Glenn Catley in the 12th and final round to lift the WBC at Carnival City.
Image: Duif du Toit/Gallo Images

Yesterday marked a day where SA made gigantic strides in boxing by hosting a WBC title fight at Carnival City in Brakpan in 2000.

Veteran promoter Rodney Berman’s Golden Gloves matched Englishman defending super middleweight champion Glen Catley against Dingaan Thobela, and the supposed wilting “Rose of Soweto” bloomed on Spring Day, September 1 – winning the title by a stoppage a few seconds into the 12th and final round of the bout that attracted 5,000 fans inside the Big Top Arena.

A number of African fighters, including legendary Azuma “The Professor” Nelson and Thulani “Sugar Boy” Malinga held WBC belts prior to Thobela, but none of them had an opportunity to appear in front of local fans.

“You’ve revoked exciting memories; I will never forget that day for as long as I live. It feels like yesterday,” said Thobela, who lost the most sought-after green and gold belt in his first defence to Dave Hilton in Canada.

There has never been another WBC title fight held in SA since 2000. Also on that day, Jacob “9mm” Mofokeng reclaimed the SA heavyweight belt from defending champion Anton “Rolling Thunder” Nel with a third-round stoppage.

Mofokeng first won the national title with an 11th round stoppage of Isaac Mahlangu. The left- hander from Bethlem in the Free State was stripped of his belt for alleged use of banned substances. He reclaimed it in 2000 and relinquished it in 2001 due to ill health.

“I don’t remember the actual date,” said Mofokeng. “To be honest with you, there was no heavyweight boxer for me here; I would have defended the title as many times as I wanted – same thing that I did with the SA cruiserweight title. I think the man who was going to give me challenge was Peter Smith but he went over to America.”

Trainer Charity Mukondeleli says he has keen interest in the upcoming fight between SA junior middleweight champion Simon Dladla and Shervontaigh ...
Sport
8 months ago
Next Article