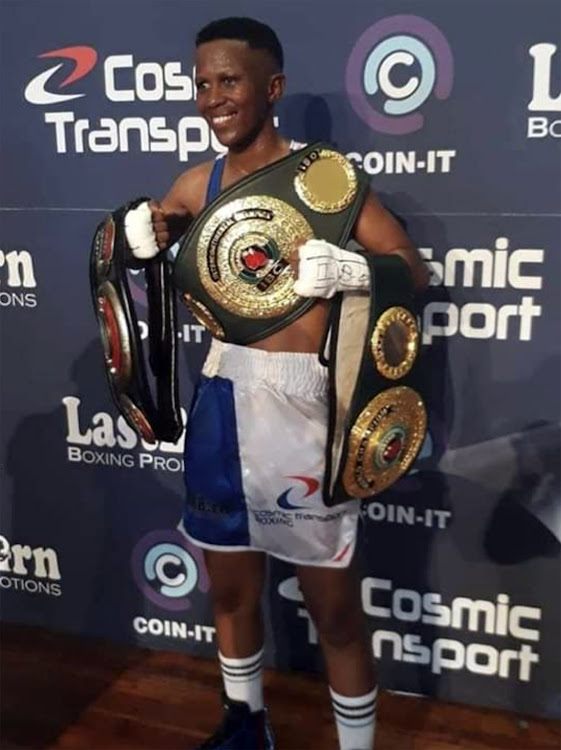 Patience is virtue, advises boxing trainer Harry Ramogoadi, whose boxer Sharadene Fortuin will on Sunday aim to make up for a failed attempt to become South African bantamweight female champion in 2013.

Fortuin’s challenge against then champion Bukiwe Nonina was unsuccessful when she lost on points in Pretoria. Nonina defended that successfully five times and ultimately claimed ownership of the championship belt before capturing the WBF belt.

Nonina relinquished the domestic title, which was later won by Mellissa Miller in 2018.

Miller will put it on line for the first time against Fortuin. Their fight will headline the tournament put together by Gauteng Boxing Promoters Association (GBPA), which will stage its event – to be dominated by females in honour of Women’s Month – at Booysens Hall, south of Johannesburg.

Ramogoadi is a former professional boxer – a talented individual – whose achievements inside the roped square ring does not truly reflect who he is.

Fortuin quit boxing because the IBO belt she held brought her more sorrow than joy. No promoter offered her the opportunity to defend the title and she could not just continue watching her peers make names for themselves in boxing.

Her inactivity saw her lose the belt in boardrooms. She then packed her bags and left Ramogoadi’s VIP Academy in Benoni and went back home in the Western Cape. Fortuin last fought in 2018. This is the same boxer whose future looked bright, especially after her impressive victory against Marie Magdalena Rivera from Argentina for the IBO belt in 2016 won her the Boxing SA 2017 female fight of the year award in Durban.

Said Ramogoadi: “I called her and we spoke at length because I would not allow her to let that talent go to waste. Look what has come her way – the chance to become a South African champion – thanks to the provincial promoters association. You know, sometimes people need to be patient.

“Sharadene is back and she’s been marvellous in her preparations. This is an opportunity she cannot let slip. Victory, which I know will come her way, will help her revive her career. With the quality work she has put there is no way she cannot rejoice.”

The eloquent trainer – who quit boxing as a fighter in 2009 after spending quality time in the UK – described Miller from Eldorado Park as a credible champion. “I’ve got utmost respect for her. It’s just a pity that she has to face the boxing music on Sunday,” he warned.

Miller – who is trained in Orlando by Lucky Ramagole – was voted 2017 female prospect of the year. She last fought in March when she was outpointed by Smangele Hadebe over six rounds at Graceland Casino in Secunda.

Also to apply patience is 2017-2018 Boxing SA female prospect Hadebe who has been denied several opportunities to challenge for the SA flyweight belt. The last chance was scheduled for March in Soweto but champion Noxolo Makhanavu was said to have collapsed during training due to exerting too much pressure on her body in her attempt to shed extra weight. It is understood that Makhanavu vacated the title this week.

Hadebe, will in the meantime, face Thema Zuma in a non-title fight on Sunday. Authorities could recognise this bout as an eliminator for the vacant national title. Hadebe goes into the fight boasting a fifth-round stoppage win over Zuma in Pretoria in 2019.

Two bouts have fallen off of the Sunday programme due to various reasons. Gabisile Tshabalala was inked to meet Ellen Simwaka while Mapule Ngubane and Rita Mrwebi were also on the bill. The organisers have since prepared two male bouts as swinger bouts – Tutus Nyandeni and Snenkosi Mlotshwa over four rounds and Saul Hlungwani against Mawandu Mbusi over six rounds.

This tournament will be broadcast live by SABC from 2pm.

Accomplished veteran administrator and former Boxing SA chairperson Muditambi Ravele is not gloating over her successes with the Women in Boxing ...
Sport
5 months ago

Trainer Elias Mpembe has warned Ellen “Tigress” Simwaka to prepare herself for war of attrition against his charge – former SA and WBF junior ...
Sport
5 months ago
Next Article