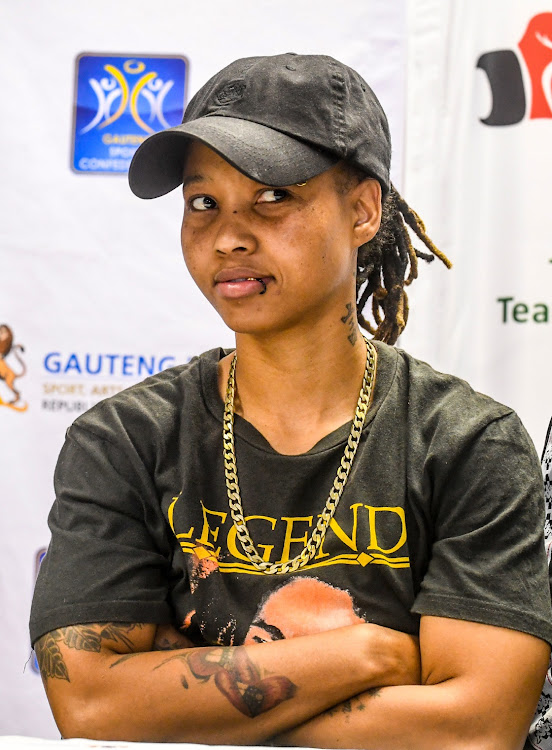 Gabisile Tshabalala is on a mission to revive her boxing career after episodes of lack of focus.
Image: Sydney Seshibedi

Trainer Elias Mpembe has warned Ellen “Tigress” Simwaka to prepare herself for war of attrition against his charge – former SA and WBF junior featherweight female champion Gabisile “Simply the Best” Tshabalala – at Booysens Hall on September 15.

Mpembe said Tshabalala is on a mission to redeem herself after two consecutive losses. Tshabalala – who was destined for greater things after outperforming ring veteran and former WBF junior bantamweight holder Unathi “Showtime” Myekeni – has not fought since losing to Matshidiso Mokebisi in 2019.

On the other hand, Simwaka, the former WBF Intercontinental bantamweight holder from Lilongwe in Malawi who is based here – last saw action in October when she pulverised Melissa “Honey Bee” Miller into submission in three rounds in Soweto.

The upcoming non-title fight between the talented yet somehow wayward Tshabalala and the equally competent Simwaka will form part of the tournament – mainly females – that will be staged by Gauteng Boxing Promoters Association.

Mpembe said yesterday: “I know what to expect from Simwaka after having watched three of her fights. She is in for a rough afternoon; actually, we will use her as a stepping stone; Gabisile is on a mission to revive her career, so anything on her way will be brutally swept aside. Ellen must prepare herself for war.”

Mpembe – who plays a guardian role to Tshabalala since she lost her mother more than two decades ago – says the boxer had reached a stage where she wanted nothing to do with boxing.

"She said boxing did nothing for her, but I kept reminding her that fighting is the only thing she knows and masters and that she must just get herself together and just focus on her craft,” he said. “I made an example of Shannon O’Connell who defeated her for the WBF featherweight title in 2013. I told her that O’Connell was 32 years old when she won her first world title.”

That Australian boxer – who stopped Tshabalala with vicious and powerful body shots in the seventh round – was ushered to war by self-exiled South African and former IBF lightweight champion Phillip Holiday.

“I told Gabisile that she is still a baby; she turns 30 next month,” said Mpembe. “I could not give up on her; she is like a daughter to me. I made a commitment to her mother that I will look after her.”

Mpembe is a successful businessman who lives in Evaton where Tshabalala stays with her grandparents. “She finally got herself together and here we are on a mission to redemption,” he said. “We are grateful to Gauteng Boxing Promoters Association for giving us this opportunity which we intend to grab with both hands.”

With Women’s Month on the horizon, Gauteng Boxing Promoters Association (GBPA) has made sure that it keeps female boxers working in the ring and has ...
Sport
2 months ago

Boxing SA 2017 female ring official of the year award winner Pumeza Zinakile says she misses Muditambi Ravele who did wonders during her three-year ...
Sport
2 months ago

Boxing promoters in East London must show true spirit of camaraderie and raise their hands in solidarity with newly crowned WBF Intercontinental ...
Sport
2 months ago

Expat former world boxing champion Lovemore Ndou, who now lives in Australia, is focused on contributing to rebuilding the country after the recent ...
Sport
3 months ago
Next Article