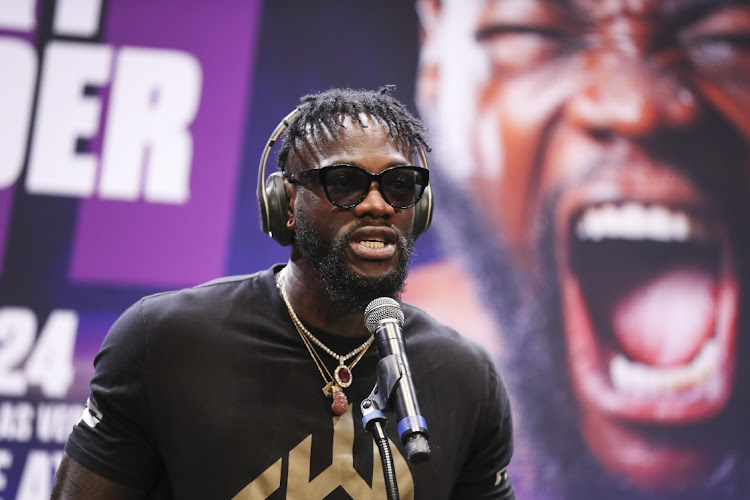 Deontay Wilder speaks briefly during the press conference with Tyson Fury at The Novo by Microsoft at L.A. Live on June 15, 2021 in Los Angeles, California.
Image: Meg Oliphant

The eagerly awaited money-spinning heavyweight boxing match, the trilogy between Tyson “Gypsy King” Fury and Deontay “The Bronze Bomber” Wilder, another battle for supremacy in the sport of boxing between Britain and America, has unfortunately been KOed by positive Covid-19 cases in Fury’s camp in Las Vegas.

In fact, it was reported internationally at the weekend that Fury from Wythenshawe, Manchester, in England, is one of the people within his camp who tested positive for Covid-19. Undefeated after 31 fights, the 32-year-old outspoken Fury was to bid for the first defence of his WBC heavyweight title against the American he dethroned via a seventh-round stoppage on February 22 in 2020 at the MGM Grand Arena in Las Vegas.

Wilder – who had won the WBC belt in 2015 – met Fury in his eighth defence in 2015. That fight was declared a split draw and Wilder from Tuscaloosa, Alabama in the US, retained it by virtue of being the champion.

Part of the estimated 18,000 fans at Staples Centre booed the decision as many believed Fury did enough to dethrone Wilder. Fury used his unorthodox stance, spening much of the fight using upper and lower body movements to avoid Wilder’s big shots and stay out of the range.

Wilder dropped Fury in round nine but he beat the count. Wilder lost a lot of energy trying to finish Fury and he looked fatigued in round 10. Wilder dropped Fury hard on his back again in round 12. The crowd, commentary team and Wilder believed the fight was over. Referee Jack Reiss made Fury walk towards him and called for action to continue. Reiss was accused of giving Fury the chance to climb off the canvas rather than waving the fight off.

The two fighters met in what was Wilder’s 11th defence in 2020 and Fury handed Wilder a brutal one seven sided rounds. That was Wilder’s first loss, first KO defeat, against 41 knockouts in 42 wins and a draw. Either Fury and Wilder has not fought since that bout in Las Vegas. Wilder’s adviser Shelly Finkel was very smart in the negotiations before the fight.

He enforced the mandatory rematch clause which stipulated that in the event Fury wins, then his first defence must be against Wilder. Their trilogy was to take place on July 24. It is been reported that it could happen around September or October.

In East London, trainer Alan Toweel Junior produced an SA mini-flyweight champion when his charge Bangile Nyangani dethroned Siyakholwa Kuse via a majority points decision. Two judges scored it in favour of Bangile while the third judge gave it a draw.

It was the main bout of Tewo Promotion’s bill at Nutting Hall on Saturday. Lusanda Komanisi knocked out Sinethemba Bam in the first round to retain the ABU SADC lightweight belt.

Tyson Fury has played down the chances of a heavyweight unification showdown against Anthony Joshua this year, claiming no progress has been made in ...
Sport
1 year ago

Successful boxing trainer Colin “Nomakanjani” Nathan is making a steady recovery in Russia after being hospitalised last week when he tested positive ...
Sport
11 months ago
Next Article