Ndongeni gets another chance at redemption 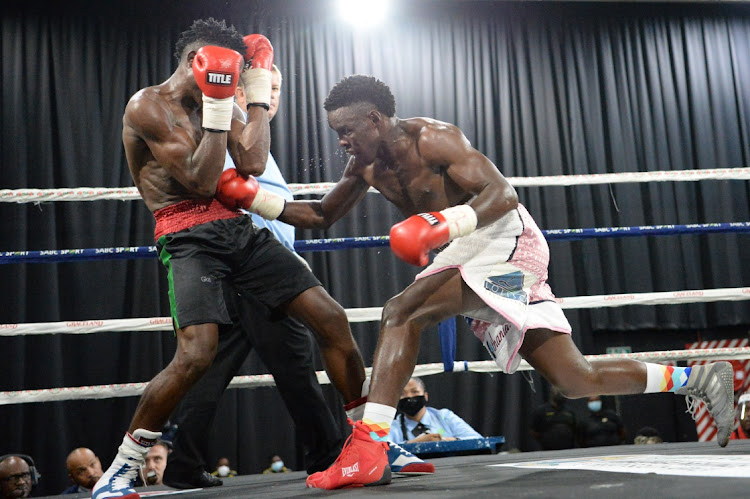 Xolisani Nomeva Ndongeni-SA vs Byson Gwayani (Malawi) during the 'Return of the Big Guns' Boxing Tournament at Graceland Casino on March 20, 2021 in Secunda.
Image: Lefty Shivambu

Joyce Kungwane has kept the fires burning inside the square ring, following in the giant footsteps of top promoter Rodney Berman, by staging a tournament that will take place at DOCC Hall, Orlando East, in Soweto tomorrow night.

Ndongeni’s loss to American Devin Haney for both the WBC International and WBO Intercontinental lightweight titles in the US in 2019 negatively affected his career, which included forfeiting his top rating, especially in the WBA, which had him in its top five bracket.

His loss – a fifth-round knockout by Prince Dlomo last year – made this even worse despite it being his first defeat to a local boxer. Ndongeni made an impressive comeback in March by registering a short-route stoppage win over stubborn Malawian Bayson Gwayani in Kungwane’s tounament in Mpumalanga.

Kungwane is, once more, making Ndongeni feel that he is still an elite fighter in the country by making him headline her event at the famous venue where Nelson Mandela trained.

Ndongeni, trained by Mzamo Njekanye and Sheldon Strydom, will welcome Peter “The Sniper” Pambeni of Zimbabwe for the WBA Pan African junior welterweight title. Pambeni is a former WBO Africa lightweight holder who has won 16 of his 23 fights with only six knockouts.

Kungwane has made sure that she practices what she preaches by including a female bout. Matshidiso Mokebisi – the current SA junior featherweight champion – will take on Bonita van Jaarsveld in a non-title fight.

The tournament also marks the return of Athenkosi Dumezweni and Emmany Kalombo. Dumezweni will face Aubrey Masamba while Kalombo will do battle with Chokinndi Makawa. Both are non-title fights.

Boxing SA must move with the times and conduct private weigh-ins early in the morning to allow boxers enough time to recover from the torture of ...
Sport
11 months ago

Arnold “Squire” Nodadile, CEO of J4Joy Boxing Promotion, has thrown the term “mayisuke” , a Nguni word that is used to stimulate warriors to war, in ...
Sport
11 months ago