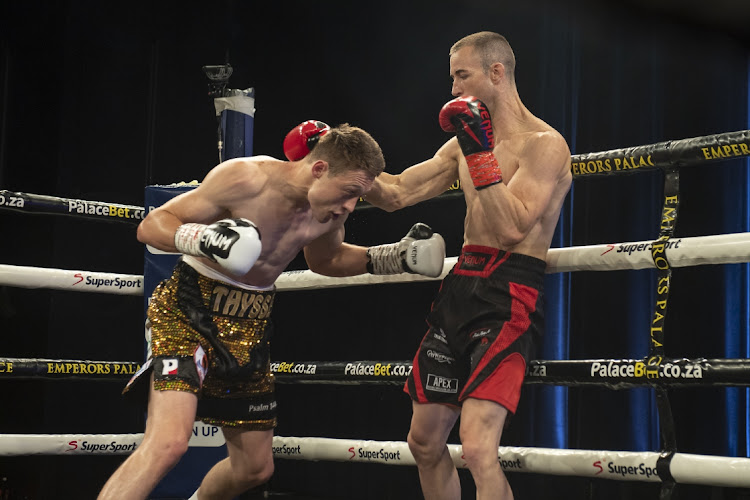 Brandon Thysse is synonymous with the word future, according to his trainer Damien Durandt who distinguished his charge as a rising star that will lighten up SA boxing.

Having honed the skills of Thysse for three-and-a-half years, guiding him to victory for the IBO All Africa and WBA Pan African junior-middleweight belts after winning the Golden Gloves junior-middleweight 4@War Super Four Series in October, Durandt has seen enough to arrive at the conclusion that Thysse will herald the dawn of a new era.

He said Thysse, the son of SA and Commonwealth super-middleweight champion Andre Thysse, has everything going for him to reach for the stars.

“He’s only 26 years old,” he said of the rangy fighter who is rated at No 57 in the world by BoxRec.Com. Durandt wants more international fights for his charge.

Their first against a boxer from outside Africa will take place on Saturday at Emperors Palace. Thysse will welcome Tomi Silvennoinen from Finland over 10 rounds. Silvennoinen, 25, is rated No 168 in the world by BoxRec.Com. He has nine wins against three losses and he’s never been stopped. He has stopped five opponents.

Durandt said Silvennoinen is tough. “He’s going to bring a new challenge to Brandon, that European style of fighting,” he said. “If Brandon gets a stoppage over him it will be a very good result because Silvennoinen has never been stopped before. Look, I don’t want to rush Brandon but instead groom him nicely. Only at the age of 29 or 30 will I want Brandon to challenge for a world title.”

Asked if by then the boxer would have gained enough confidence and experience, the trainer said: ‘He’s got confidence, he just needs experience.”

He made it clear that confidence and hand speed were Thysse’s best weapons. “Brandon's also heavy-handed – [he] knocked out 11 opponents in 13 wins. He can punch. I am looking forward to seeing Brandon display another element of his ability in this fight,” added Durandt.

Ludumo Lamati gets the golden opportunity to win a world title when he takes on Jose Martin Estrada Garcia for the vacant IBO junior-featherweight belt in the main attraction.

Successful boxing trainer Colin “Nomakanjani” Nathan is making a steady recovery in Russia after being hospitalised last week when he tested positive ...
Sport
7 months ago

For someone blessed with massive boxing talent, it is hard to believe that Ludumo “9mm” Lamati does not have a world title to his name, despite being ...
Sport
7 months ago
Next Article