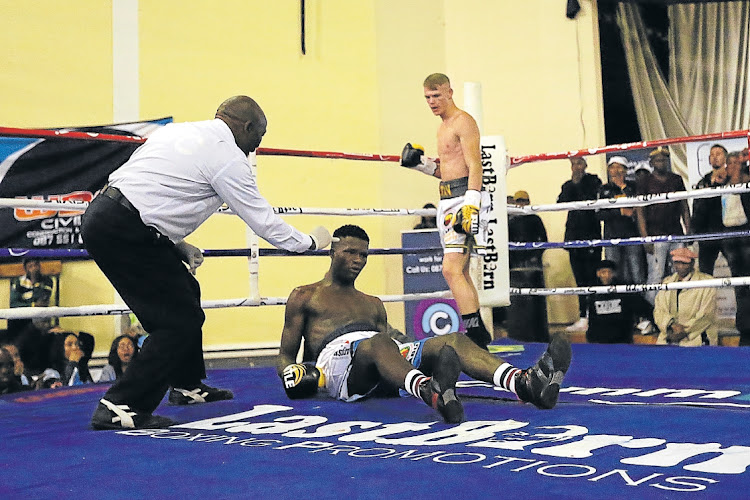 Tristan Truter knocked his opponent down in the first round Picture.
Image: Mark Andrews

If you are looking for finesse, intelligence and maturity look no further than Tristan Truter. The tall and rangy 21-year-old boxer from Boksburg is one of the young fighters who qualify for Boxing SA’s prospect of the year award.

His future looks good but that, obviously, will be determined by how he is managed.

Truter was poetry in motion as he moved gracefully around the ring while taking care of business like a surgeon performing an operation when he met Wandile Ndela in one of the undercard fights of Upper Cut Promotions’ maiden tournament at Booysens Hall in Joburg recently.

Truter – an ABU welterweight holder – picked the right spots and combinations as he fired well-executed punches at the stubborn Ndlela. The performance and pace of the fight was probably just what the doctor ordered for Truter, who was shaking off ring rust.

He had been inactive for six months, having last fought in October, losing by a second-round stoppage to Roarke “Razor” Knapp in Golden Gloves' 4@War series.

It was Truter's first fight under Nathan in Booysens. Truter’s father Johann assisted Nathan in the corner.

Johann said: “We were happy with his performance, movement and angles. We know Tristan has got power, but we did not want to him to use any but instead just to box. I am happy with what Colin has done in moulding him. You know the dynamics in his gym are great and Colin treats my boys like his own sons.”

Having fought only 10 amateur fights, Truter made a resounding pro debut in 2017 by defeating Nigerian Fidelis Okondjo in Kempton Park. At that time Truter was under the guidance of veteran trainer Harold Volbrecht.

Truter lost his second fight by a stoppage to Khensamahosi Makondo. That defeat brought the best out of him and he later recorded seven straight wins, five by stoppages. One of those wins was for the ABU belt, which he won in 45 seconds, without breaking a sweat, against Xolisa Nonkonyana.