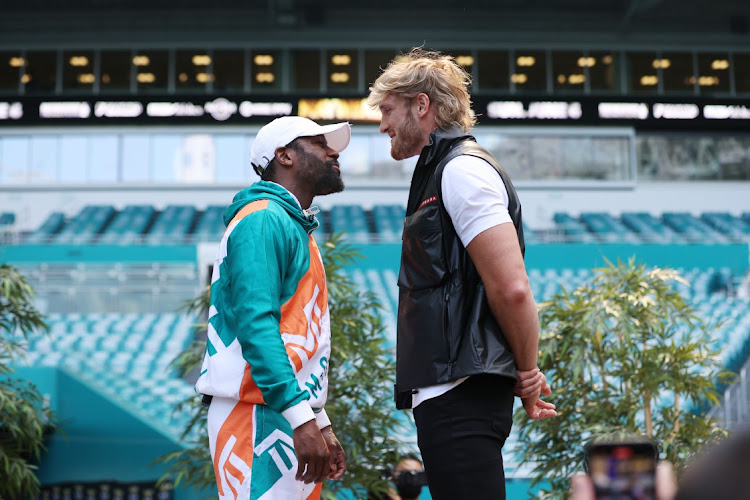 Floyd Mayweather and Logan Paul face off during media availability prior to their June 6 match at Hard Rock Stadium on May 06, 2021 in Miami Gardens, Florida.
Image: Cliff Hawkins

Innovation, the practical implementation of ideas that result in the introduction of new goods or services, is required in SA to spice up the sport of boxing.

This fisticuffs sport needs to be exciting to bring fans back. Great minds need to come together and think out of the box by introducing something new during boxing matches.

This country has done that before, bringing 5,000 people from sport, radio, entertainment, business and politics together at Carnival City in 2006 where 30 of the hottest celebrities displayed their mental and athletics prowess in the boxing ring.

Each bout consisted of three two-minutes rounds with one-minute breaks. Money from the sale of tickets, which ranged in price from R36 to R106, depending on the seating at the Big Top Arena, was donated to the Variety “Water for Schools” project in Limpopo.

Today, countries like the US are going big with celebrity fights. Floyd Mayweather Junior and social media personality Logan Paul will exchange blows in an exhibition bout at Hard Rock Stadium in Miami, Florida on June 6.

Pressed for comment on such innovations, BSA’s acting CEO Cindy Nkomo said: “We are still looking at our sport as boxing when it has gone beyond that. We must all look at how best to attract sponsors and introduce new fans into boxing. In fact, this idea must be taken to the board of BSA to look at. Involving one or two celebrities in our tournaments will not be a bad idea.”

Boxing almost benefited from the beef between rappers Cassper Nyovest and AKA, who challenged Cassper to a fist fight in March last year but the fight has not happened.

Imagine super match-ups between Dingaan Thobela and Brian Mitchell, Andre Thysse and Tshele Kometsi, Connie Ferguson and Nkomo, Colin Nathan and Mzamo Njekanye, Koena Moabelo and Thabiso Mosea, Bareng-Batho Kortjaas and Robert Marawa, Sipho Mashego and Thomas Mlambo, and Andile Ncube and Phumlani Msibi, whose participation in a tournament could revive the sport in terms of mileage and attention.

Boxing SA’s new board outlines ambitions to transform the sport

Boxing SA’s new seven-member board met last weekend for the first time since their appointment by sports minister Nathi Mthethwa in December, ...
Sport
9 months ago
Next Article