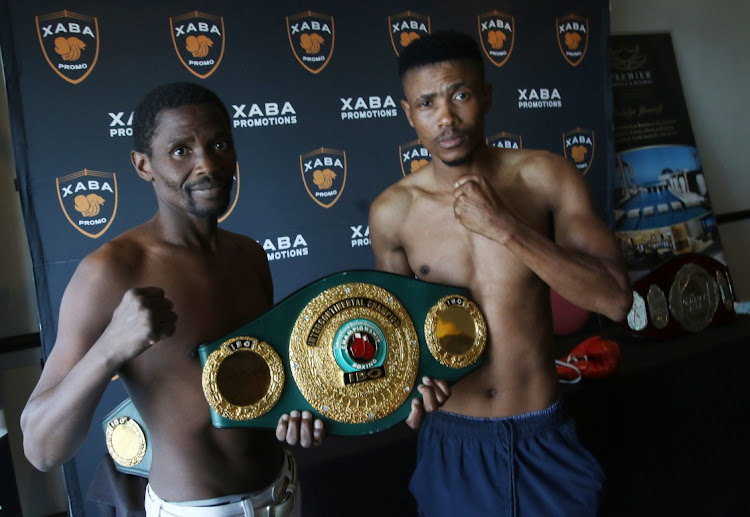 Nkosinathi Joyi and Ayanda Ndulani pose with the championship belt ahead of their fight this coming friday at the ELICC.
Image: Michael Pinyana

Trainer Kholisile “Kay Cee” Cengani has no qualms with his boxer Ayanda “Fireblows” Ndulani being tagged as the dark horse in his fight against IBO straw-weight champ Nkosinathi “Mabere” Joyi.

The unheralded trainer says this takes away any pressure to impress both the fans and experts, but instead allows them to execute their game plan.

Cengani is confident that a new champion will be crowned tomorrow night in East London. “There is no two ways about this, we are going there to take the title away from Joyi,” said Cengani, whose unheralded boxing stable has collected 11 titles.

“I came under heavy criticism for accepting an offer on behalf of Aphiwe Mboyiya against experienced SA featherweight champ Jasper Seroka. My answer was to accept an offer of a fight I know my boxer will win.”

Mboyiya dethroned Seroka in 2016 and ended his career.

Cengani will also be hoping that Mboyiya beats Luvuyo Mphuthi in one of the undercard fights of the Xaba Promotions tournament. Mboyiya is rated No 4 in the lightweight division. “Victory against him will improve our ratings,” said Cengani.

Many fight fans and experts have tipped Joyi to cruise past Ndulani and register the second defence of his IBO straw-weight title. Their opinions are based on Joyi’s longevity in the fight game, where he has previously held the SA, IBO and IBF belts, and the mental capacity he has shown in big fights. In truth, that all happened in the past when he was fresher and hungry for boxing glory.

At 37, everything is deteriorating and what could be fuelling him now is a hunger for profit. History has proven how dangerous boxing can be for any fighter once their involvement is driven by the desire to make money, especially when age is also against them.

Joyi will put his belt on the line against a younger, hungrier and equally capable boxer.

Ndulani is 29 years old and still fresh when it comes to potential damage sustained from the sport. The ABU champion has boxed 88 rounds in 13 fights with 10 wins, two losses and a draw. Joyi has boxed since 2002, but disappeared for the whole of 2017. In 36 bouts he boxed 206 rounds and won 29 fights.

Top boxing promoter Ayanda Matiti will on Friday continue in his struggle of showing compassion and helping fighters restore their broken hopes ...
Sport
6 months ago