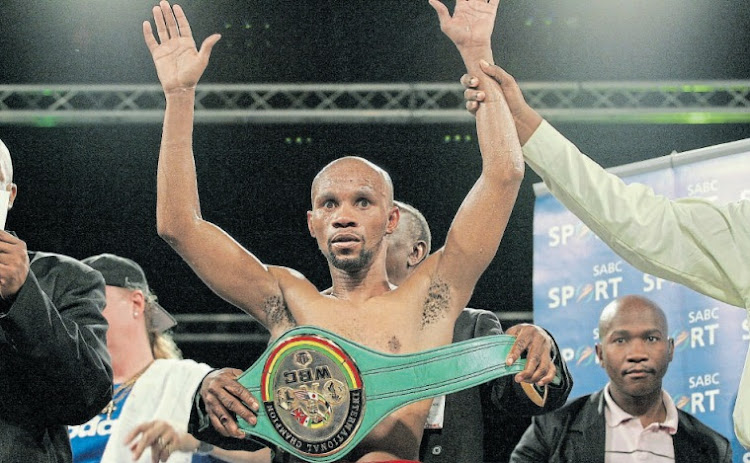 Title holder Hawk Makepula celebrates during the WBC junior bantamweight title fight against Jun Talape of the Philippines at the Graceland casino in Secunda in 2006.
Image: Gallo Images/Lefty Shivambu

Khulile Radu yearns for the good old days when SA had great boxing stars  – Hawk Makepula, Irvin Buhlalu and Phillip Ndou – who represented the country at the 1996 Olympics in Atlanta where Makepula was the flag bearer for the SA team.

Luckily this former boxer himself has been tasked with fashioning a masterplan to inform the implementation of key aspects of the Boxing SA priorities which are aimed at renewing and transforming the sport.

He will work with veteran ring official Stan Christodoulou and Loyiso Mtya. Asked about his appointment by the board of Boxing SA, Radu said:  “I think it is the board’s realisation that there is something amiss in terms of the standard of boxing in the country. So I think that is what rekindled the idea of going back to the basics – doing what we used to do – bring up bona fide champions and generate interest in the national title.”

He added that SA is known for producing rich talent and he mentioned the likes of Makepula, Cassius Baloyi, Mabuza, Buhlalu and Ndou among others.

“These guys were untouchable in the amateurs and look at what they did in the professional ranks – they won multiple titles. That is because they had been taught basics,” said Radu. “Right now the country does not have even a single name that will represent us in the upcoming Japan Olympics in June.”

The last time Africa had a representative in the Olympics was in Beijing in 2008 where Jackson Chauke bombed out in the opening stages of the global sporting showpiece. The Tembisa based boxer is the current SA and WBC International flyweight champion.

Mtya said: “I am honoured to be part of the group. I believe I can still offer a lot to boxing. If they believe I can add to the turnaround of boxing I am there. What better opportunity to do that, working with great historian and referee Stan Christodoulou and Khulile Radu, someone who was there during the fights to change the landscape of boxing. These are people who know exactly where boxing should go. I believe I have a stone to throw in making boxing grow or even get better.”

Boxing SA board chairman Luthando Jack has gone for knowledge, understanding and practice in choosing the back-to-back working group which is tasked ...
Sport
1 year ago

'I've done everything I wanted; it's time to say goodbye'
Sport
1 year ago

Molekwa, Molefe recognised for their dedication to boxing at emotional ceremony