Molekwa, Molefe recognised for their dedication to boxing at emotional ceremony 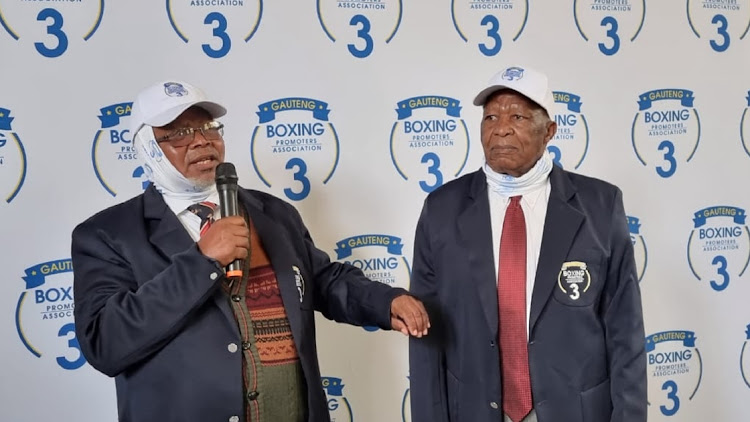 Veteran boxing Promoters Obed Molekwa and Pat Molefe during a ceremony where they were honored on Saturday.
Image: Shereen Hunter

Much as we need money to meet the needs of the flesh, we also need care and love from people to meet the inward want, which is our subconscious self. Conversely, giving is always misconstrued as something to do with money. This where we most often do not get it right.

Veteran boxing promoter Obed Molekwa demonstrated this during his emotional speech on being honoured by the Gauteng Boxing Promoters Association (GBPA) in front of an array of old time boxing greats at Uncle Toms Hall, Orlando West, Soweto where GPBA hosted a dinner for the province’s legends on Saturday.

Molekwa is a former trainer who ended up being a promoter under the banner of Peoples Boxing Promotions. “I have been in boxing for over 40 years but I have never been honoured. I want to thank TK (Tshele Kometsi) and colleagues for recognising my contribution, thank you,” said Molekwa. “I dedicated my life to the sport at every level and that includes changing the ugly past to the brighter today. We did this for love; we were and are still passionate about boxing. I am happy today that finally my devotion is being recognised.”

Molekwa and former trainer, matchmaker and promoter Pat Molefe were presented with the association’s blazers. Kometsi, a promoter and the chairman of the GPPBA, explained that they would have loved to invite as many legends as they could but had to trim the list due to Covid-19 protocols. Among yesterday’s star who were attendance was Hezekiel Mtshali, Pierre Coetzer, Morris Mohloai, Harold Volbrecht, Johannes Sithebe, Noman Hlabane, Peter Ngatane, Jeffrey Mankune, Leo Simelane, Jerry Mbitse, Giovanni Pretorius and Jan Bergman.

Boxing SA was represented by chairman Luthando Jack and Gauteng provincial manager Jaap van Niewenhuizen, while matchmakers Abbey Mnisi and Luyada Kana were also in attendance. The legends were in cloud nine after being informed they would each receive calls for a full-on health examination valued at R10,000 per person – this was how GPBA showed its appreciation of what these former trainers, managers and boxers did to pave way for a brighter future for the sport in the province.

Jack said: “TK, continue to provide us with this type of leadership. How I wish all promoters’ associations across the country can take a leaf out of the Gauteng Boxing Promoters Association’s book. I am revived by being in such a gathering with no fights but where legends are recognised.”

Kometsi’s team, which comprises Shereen Hunter, Nomakhosi Mabuya, Janie Hebler, Bongani Dlamini, Cyril Lehong and Chris Mbali, took the office in November. They helped struggling boxers in the province who missed out on action due to Covid-19 by paying for medical examinations they needed to be relicensed as professional boxers by Boxing SA in March. It was a result of a resolution taken  at their bosberaad in February.

It is hard to miss the parallels in the death of SA’s top boxing trainer Nick “Mthakathi” Durandt and the rise of Colin “Nomakanjani” Nathan, who has ...
Sport
6 months ago

It’s 14 years this month since Isaac “The Angel” Hlatshwayo  – a rural boy from Shisasi Village in Malamulele – confirmed his greatness as a pugilist ...
Sport
6 months ago

Kevin Lerena‚ holder of the marginal IBO cruiserweight crown‚ will take on WBA world champion Ryad Merhy in a unification contest in Brussels on July ...
Sport
6 months ago
Next Article