Edwards reveals how he dethroned Mthalane 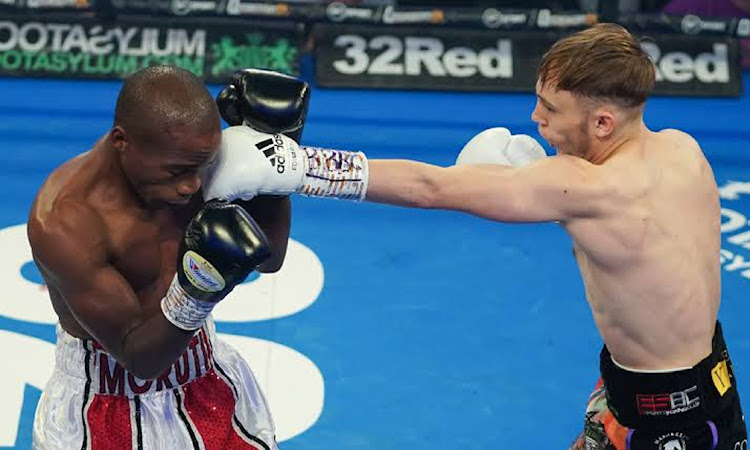 Sunny Edwards measures Moruti Mthalane with a long jab during their fight which the Briton won effortlessly on points to capture the IBF flyweight belt last weekend.
Image: Boxing Junkie

Sunny “Showtime” Edwards has shared his winning game plan for the biggest fight of his career when he outpointed Moruti “Baby Face” Mthalane to wrest the IBF flyweight belt from him.

In their Friday nigh bout in London, the British boxer decided to fight the South African from the outside because going toe-to-toe with him would have been suicidal.

Edwards, a novice of 15 fights, looked to have bitten off more than he could chew but in truth he outsmarted not only Mthalane but his entire camp. When Mthalane threw punches, Edwards’s movement ensured that only a single blow got home but more often than not it was the challenger who flicked home a variety of punches while switching effortlessly from the southpaw to orthodox stance.

Mthalane, 38, has been a professional boxer for 21 years and he’s fought against boxers with different styles. He was able to figure all of them out and eventually emerge victorious. Was it because trainer Nick Durandt was such a wonderful game reader?

Surely after 20 years, and being involved in his 11th world title fight, the former champion who is now trained by Colin Nathan can read the fight on his own and change gears if the need arises. Mthalane should have realised after three rounds that Edwards was doing exactly what he had said he would do, and change the strategy.

No matter what happens, the truth is that the pocket-sized former IBF and IBO champion has been a superhero who should walk tall. He accomplished a lot and for his efforts, hard work and dedication, he was voted the 2019 SA Sportsman of the Year.

IBF and WBO Intercontinental flyweight champion Sunny “Showtime” Edwards is a talented young British fighter with a bright future ahead of him. But ...
Sport
2 weeks ago

Moruti Mthalane has been hit hard, very hard to be precise, in his boxing career, spanning 21 years. But despite having absorbed power punches, the ...
Sport
1 month ago
Next Article