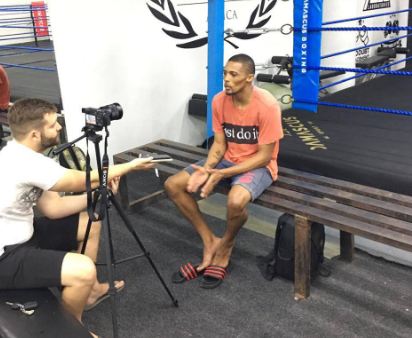 Khanyile Bulana's camp will ask the IBO to review his fight following the conduct of the referee during his title challenge to Michael Magnesi in Lazio‚ Italy at the weekend.

Bulana was knocked out in the first round of their IBO junior lightweight title clash.

However the stoppage by Italian referee Sauro Di Clementi caught the East London boxer by surprise.

Bulana was rocked by Magnesi's right hand which dropped him on his back.

He quickly recovered and took the mandatory eight count on one knee. Just as he was getting up‚ Di Clementi stopped the fight.

Bulana said the Italian referee started the count at five‚ with his claims supported by television footage.

“I knew that when he reached eight I would stand up because I was not dizzy at all," said Bulana.

''I was surprised when the referee waved the fight over while I was on my feet.”

The loss was the first for Bulana in 13 bouts and is distraught at the outcome.

“I am devastated to be honest. I do not want to sound like I am making excuses but I would have loved to lose the fight fairly so that there would be no questions marks.”

Bulana — who was led to the fight by Vusi Mtolo as chief trainer Colin Nathan is in England with Moruti Mthalane who is defending his IBF world flyweight title against Sunny Edwards on Friday — claimed that everything was against them in Italy.

Even the singing of the South African national anthem was cut short.

“We were given the run around there‚” he said.

“Everything was communicated in Italian language.”

Asked if he could have won the fight if the controversial stoppage did not happen‚ Bulana said: “I was still very much in the fight.

"Yes‚ Magnesi wanted to knock me out but I was able to time him as he lunged in.

"I cannot predict what would have happened but I had already detected his weaknesses.

"I simply made a mistake by disengaging with my guards down‚ hence he caught me. The punch landed as I was retreating so it caught me off balance.”

Back in the country‚ Bulana said he would sit down with Nathan to plan his next step.

“This is my first loss so it is a bit hard to swallow but we will see what to do moving forward. “

Bulana is rated highly in the country as he occupies second spot in the junior lightweight having already beaten reigning South African champion Phila Mpontshane when they contested the ABU title.