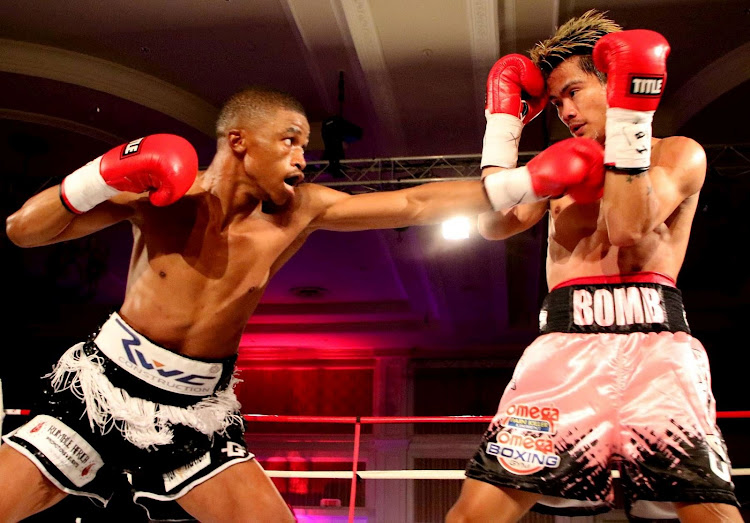 IN CONTROL: Sive Nontshinga throws a jab at Filipino Christian Araneta in their IBF world junior-flyweight title eliminator at the Boardwalk in Gqeberha on Saturday April 24 2021.
Image: FREDLIN ADRIAAN

A knockdown by Filipino Christian Araneta sparked some anxious moments for Sive Nontshinga, but it was too little too late to save the visitor from defeat in their IBF world junior-flyweight title eliminator at Boardwalk Casino in Gqeberha on Saturday night.

Nontshinga appeared to control the fight as he flicked his jab and used lateral movements to avoid the Filipino’s left hand.

Araneta came to the fight having knocked out 15 of his 19 victims against a single loss and it was obvious that he relied on his money punch to carry him through.

Though Nontshinga had never gone the distance in his nine bouts, the firefight that was expected soon fizzled out as the local opted to tee off from a distance.

It was Araneta who looked like scoring a knockout as he swung his left which missed until a few seconds before the end of the fight.

Nontshinga, who had promised a knockout, never looked like carrying out his prediction as he circled to the right, negating his own right hand in the process. But he was happy to collect points with his left jab though it hit the guards most of the time.

The crowd, sparse owing to Covid-19 restrictions, screamed in delight every time he threw a jab, even when it did not land. That may have lulled him into a sense of complacency, thinking the fight was already in the bag.

When Araneta’s left finally sent him crashing onto the seat of his pants, the fight threatened to swing in the visitor’s favour.

But Nontshinga was able to ride out the time to ward off Araneta’s late rally.

The scores showed the fight was much closer than everyone had anticipated, with a difference of just one point in two of the judges' scorecards while the third turned in a three-point difference. It did not matter as Nontshinga emerged victorious with 114-113 twice and 115-112.

With the win, Nontshinga has now qualified to challenge IBF champion Felix Alvarado.

Boxing SA has moved to allay concerns of licensees regarding an online licensing contract awarded last year.
Sport
2 weeks ago