Fight will take place on June 19 at Emperors Palace 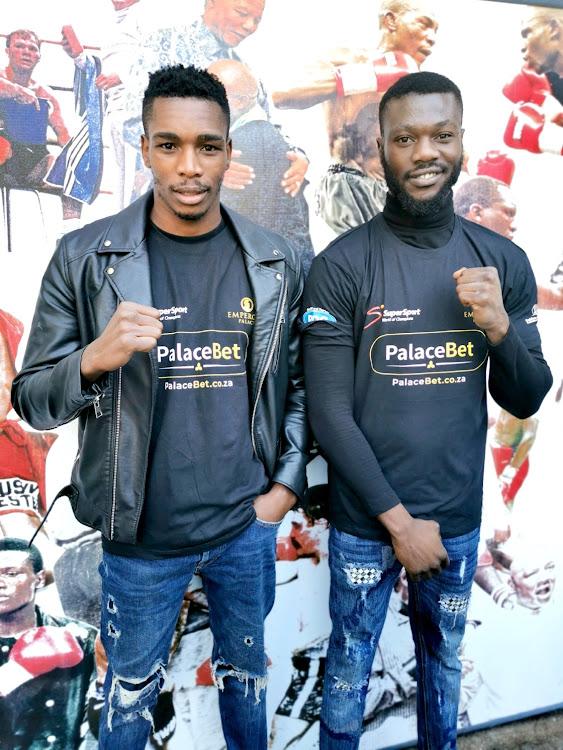 Fighters Thulani Mbenge and Jabulani Makhense came face-to-face yesterday after signing on the ditted line for theirs howdown to take place at Emperors palace on June 23.
Image: Jeff Ellis

Mbenge shook Makhense’s hand but gave him a fake smile before signing the contract to meet next month. They came face-to-face in Rosebank where promoter and attorney Rodney Berman shares the space with partners Stan Fanaroff and Raymond Hack.

Makhense moved up and down and at times flicked jabs in the air with trainer Sebastiaan Rothmann giving slight attention to the proceedings. Suddenly, trainer Sean Smith and Mbenge were in the area and there was a slight commotion as they hurried to the table where he signed the contract.

Their fight will take place on June 19 at Emperors Palace.

Smith said: “We are grateful to Joyce Kungwane who brought us back to the game after losing the IBO title. Hopefully, we will still work with her in future, unfortunately a fight of this magnitude has to happen under Golden Gloves with SuperSport broadcasting it. It’s the right fight at the right time. Jabulani is a good boxer but Thulani is the best. That is where the difference is and it will show on the night.”

Rothmann said: “This is proper step up for Jabulani towards achieving greatness. Both camps are going to hate each other, say all sorts of things. Tempers flare up now and then and it happens even between you and your fighter. In the end we will all kiss and tell, and that is the nature of the beast.

Rothmann is the former SA, WBU and IBO cruiserweight champion.

Strange as it may sound, Khanyile “Silent Problem” Bulana has ostensibly chosen death than to lose in an IBO junior-lightweight title against ...
Sport
2 weeks ago

SA junior featherweight boxing champion Ayabonga "Jay Jay” Sonjica can become the finest fighter in SA if promoters give him opportunities to test ...
Sport
2 weeks ago

Expect to see the Azinga “Golden Boy” Fuzile that you all know when he takes on Martin Ward in an IBF junior-lightweight elimination fight at ...
Sport
3 weeks ago
Next Article