It's all about sanctioning fees, says Ngatane 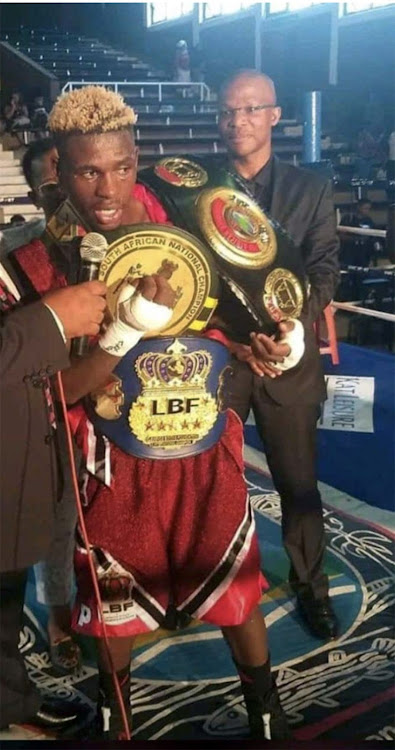 Sabelo Ngebinyana has not been given the opportunity to defend his Legends Boxing Foundation belt.
Image: SUPPLIED

SA has literally become a starting block for insignificant boxing titles. Former Boxing SA board chairman Peter Ngatane spoke against this during his tenure.

Although conflicted since he represents the WBC, Ngatane was responding to a question about the dubious conduct by the WBA and WBF which sanctions boxers who do not even qualify for provincial titles.

The WBA had sanctioned Daniel Bruwer to oppose Thomas Oosthuizen for its vacant Pan African light heavyweight belt in 2016. Bruwer had last fought in 2014 when he was badly knocked out in the seventh round by Oleksandr Usyk for the WBO Intercontinental title.

On the other hand, the WBF had sanctioned Johannes Peterson, who had 16 losses against 10 wins and he was badly knocked out in six rounds by Bongani Mlotshwa for the All Africa junior middleweight belt.

Ngatane said: “We had a meeting as BSA board and it was decided that even though these sanctioning bodies can sanction a bout, we still have a say because of our jurisdiction. We are in the process of grading them because some do not deserve to be staging their fights here. It is all about money [sanctioning fees].”

Sadly, Ngatane, whose ABU SADC also sanctions questionable match-ups, did not practice what he preached. He, together with his colleagues at BSA, allowed unknown Legends Boxing Foundation (LBF) to have its title contested at Orient Theatre between Sabelo Ngebinyana and Sikho Nqothole in 2019.

Now another insignificant title will take place at Boardwalk Casino on April 24 in a tournament to be organised by Rumble Africa Promotion (RAP). A WBO Global belt will be given to the winner of the SA flyweight championship fight between holder Jackson Chauke and Luyanda Ntwanambi.

RAP CEO Nomfesane Nyatela had no idea as to what the WBO Global title is and she referred this writer to RAP international advisor and trainer Colin Nathan.

“The WBO Global title is one of the more prestigious ... secondary to the actual WBO world titles,” Nathan said.

BSA board last month took a resolution, calling for bilateral engagements with international sanctioning bodies to set up a working relationship aimed at the development of boxing in the country. But currently the tail is wagging the dog.

Sean Smith did not mince his words yesterday, reacting to the proposed showdown between SA and ABU welterweight champion Thulani “Evolution” Mbenge ...
Sport
2 months ago

The match-up between Jackson Chauke and Luyanda Ntwanambi – scheduled for April 24 – has become so educational that even experts have not been able ...
Sport
2 months ago

Internationally respected boxing referee Deon Dwarte has once again been recognised by the IBF to handle the junior flyweight elimination fight ...
Sport
2 months ago
Next Article