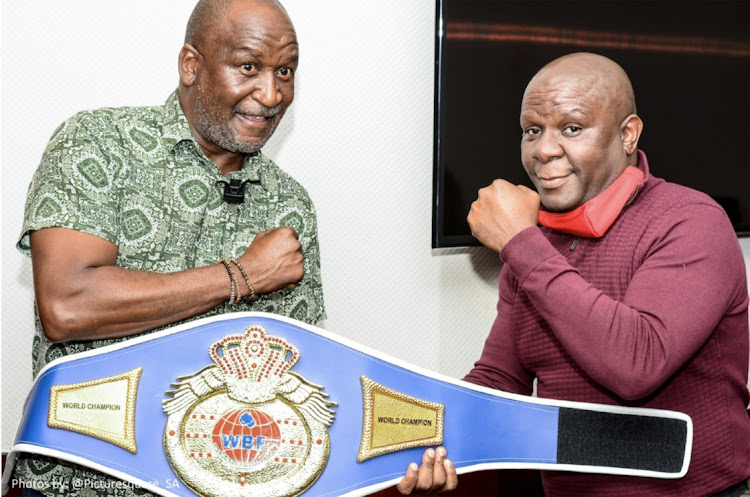 Render unto Caesar the things that are Caesar’s. That was said yesterday by Tembisa-based businessman Kenny Mametsa, in reference to the presentation of a replacement WBF junior-lightweight belt to Ditau Molefyane by WBF president Howard Goldberg.

Molefyane’s belt was stolen by Mexican Aaron Zarate after dethroning Molefyane via a seventh-round stoppage in Durban in 1994. Mametsa paid R13,000 to get the new belt.

On the night of the Zarate fight, his belt was not on the line. The promoter should have purchased a new belt but he did not. Molefyane gave his belt to Zarate to pose with after the fight. Little did he know that he would not get it back.

He shared his misery with this writer last year and a story was written. Goldberg advised Molefyane, who is also from Tembisa, to raise about R13,000 for a new belt.

Mametsa says he was touched by the article in Sowetan.

“As a boy who grew up under him and looked up to him as our sporting hero who brought joy to us, I decided to assist in making sure that Ditau gets his belt,” said Mametsa.

“I am very happy and excited to have assisted Ditau. Give to Caesar what belongs to Caesar. Thanks a lot to Sowetan.”

Molefyane shuffled like Muhammad Ali and was a master showboater who danced in the ring, winding his punches and feigning jabs like Sugar Ray Leonard.

“This belt means everything to me. Without proper words to explain my feelings I am touched by what Kenny did in making sure that I get it. It shows that I am being appreciated,” he said.

Goldberg said: “We don’t sell belts, you earn them inside the ring but because of the story behind his lost belt we had to do what we did to get him his belt. I am happy that he got the belt he deserved years ago.”

The contentious three-fight rule that has almost torn the boxing fraternity apart has been officially removed from the regulations, Boxing SA acting ...
Sport
4 weeks ago

Never mind what people say, the truth though is that Sivenathi Nontshinga is being rushed into big platforms when the 22-year-old is still a ...
Sport
4 weeks ago
Next Article