'I am warning other boxers not to go there' 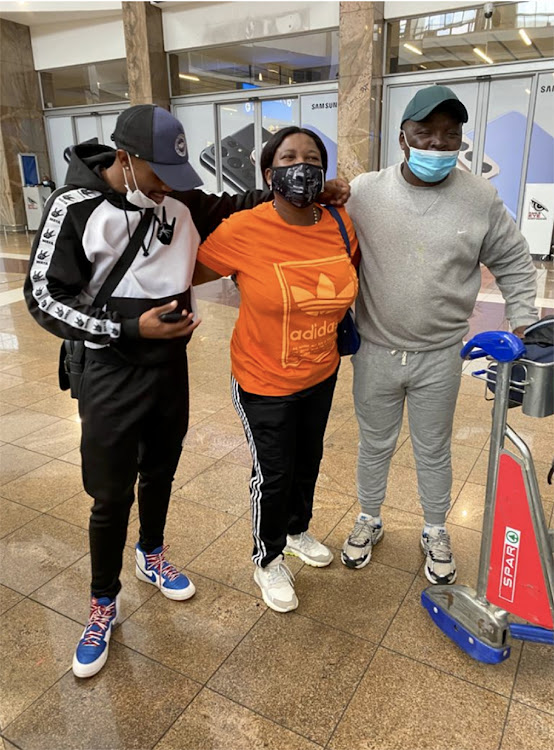 Thato Bonokoane and trainer Lehlohonolo Ledwaba arrives at OR Tambo International Airport from Russia where they had a boxing match. With promoter Joyce Kungwane.
Image: Sipho Mashego

Former SA junior featherweight champion Thato “Captain Charisma” Bonokoane has complained of what he called racial prejudice in Russia and has urged local professional boxers to avoid fights in that country.

The boxer from Kagiso was there a fortnight ago for the WBO Oriental title fight, which he lost by a stoppage in the ninth round to Arsor Vokhidov in Ekaterinburg. That was Bonokoane’s first boxing match outside South Africa. He has been in the fight game since 2013.

He went over there two weekends ago with trainer and former multiple world boxing champion in three weight divisions and now a successful trainer Lehlohonolo "Hands of Stone” Ledwaba to oppose Vokhidov for the WBO Oriental title.

Bonokoane is livid after being allegedly treated inhumanely by Russians. “People in that country are racists; that country is not friendly to a black man. Everything there was just against us. It was a catastrophe,” he said yesterday. Bonokoane and Ledwaba touched down at OR Tambo International Airport on Saturday afternoon.

“I am warning other boxers not to go there. The attitude from Russians, even in the hotel where we stayed as well as their food, was so terrible. Some people will say I am saying all these things because I lost a fight there. The truth is that that guy (Vokhidov) hurt me and I am being honest. Every punch he threw and landed on target hurt me. This has nothing to do with the attitude and treatment we received there.”

Bonokoane said the worst was to come when they landed in Moscow to connect a flight back home. “We were not allowed to board. They demanded Covid-19 tests and at that time our flight was about to leave,” he said. “We ended up sleeping on a bench at the airport without food. The next day I approached a Russian and requested to use his mobile phone to call Mme Joyce Kungwane (Bonokoane’s promoter) to inform her of the crisis.

Meanwhile, Eastern Cape boxing matchmaker Luyanda Kana has announced that time keeper Nangoku Tetani has passed on and will be buried on Saturday at KwaKhulile Zigodlo.

Boxer's mom succumbed to cancer four days before he knocked out Ntsele.
Sport
6 months ago
Next Article