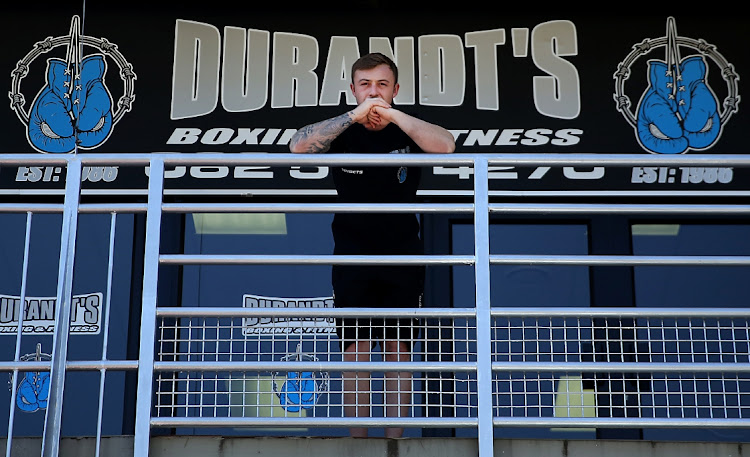 Damien Durandt at Durandts Boxing Gym, in Linksfield , Johannesburg. He is following in his fathers, Nicks, footsteps.
Image: Alon Skuy

Damien Durandt, the son of late successful trainer Nick “Mthakathi” Durandt, continues writing his own history as a boxing trainer.

Durandt senior produced 38 world champions from different boxing sanctioning bodies. He guided 27 fighters to international titles and 95 South African champions. He was also the first South African trainer to produce a WBC champion, with Thulani “Sugar Boy” Malinga winning the super middleweight belt twice. Durandt was killed in a motorbike accident in the Free State in 2017 at the age of 53.

He had already retired from boxing and Damien, who began working in boxers’ corners alongside his father when he was only 14 years old, had taken over. He produced his first world champion last year when Ilunga “Junior” Makabu won the WBC cruiserweight title.

Makabu was introducedto boxing by Nick. Damien also helped Makabu retain his belt with a seventh round stoppage of US-based Nigerian, Olenrewaju “God’s Power” Duradola, in the Congo on December 19.  Damien became the first local trainer to help an African boxer retain the most-sought-after WBC belt.

“I am very happy with Junior’s performance,” said Damien yesterday. “I think Duradola came to fight, which he always does. He brought a good fight to the championship but obviously Junior is multiple classes above him. Junior controlled the fight from round one until the finish.”

Duradola was defeated by Thabiso “The Rock” Mchunu on points for the North American Boxing Federation title in the US in 2014.

Damien said Makabu was delighted to have defended his title at home. Damien and Makabu spent nine weeks in Germany, where they set up a training camp.

“Junior’s goal is to unify the division,” said Damien, who handled  only four fights last year due to Covid-19.

“Usually I have about 35 fights a year. I have valuable fighters - Emmany Kalombo, Jackson Chauke, Athenkosi Dumezweni, Ricky Tshabalala and few other youngsters - who had no fights last year.

"I salute Congo for staging two world championships, one in January and the second in December.”

Makabu improved to 25 knockouts in 28 wins against two losses while Duradola suffered his eighth defeat against 38 wins, which includes 31 knockouts.

He may be gone but his spirit will live forever. That is how Zolani "Last Born" Tete and Moruti "Baby Face" Mthalane, the country's top professional ...
Sport
1 year ago

The WBC cruiserweight championship fight has become an African affair, and this is history for African boxing regarding this most-sought-after belt.
Sport
5 months ago
Next Article