King looks to dispose of Siyo on Sunday 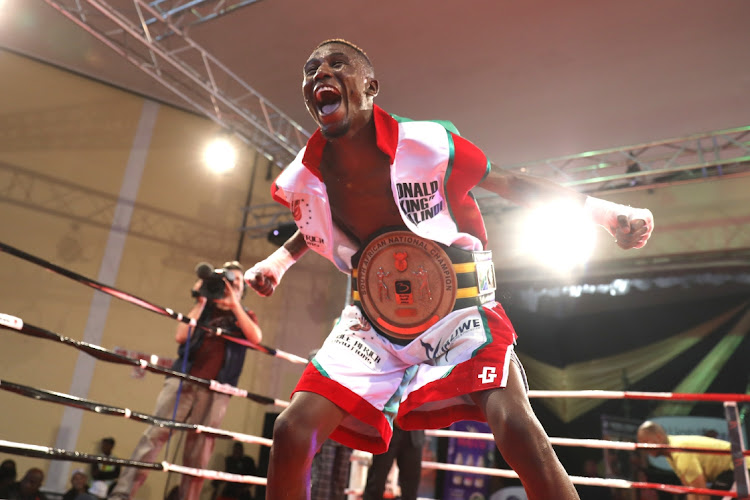 Ronald Malindi gestures to the crowd after defeating Michael Daries during the SA Bantamweight title fight at the Orient Theatre.
Image: ALAN EASON

Boxing has become a way of life for Ronald “King” Malindi and the reigning South African bantamweight champion has vowed to fight from dawn until dusk in the defence of what he terms  the “meal ticket” for his family.

He was referring to the domestic title that he has held for two years now. “At first you box for fun but everything changes as you go along; you mature in every aspect of life and you become responsible," he said yesterday. “You then realise that the only way to a brighter future is to be more passionate about what you do, focus and dream big."

The 25-year-old father of a three-year-old girl and a taxi driver in his spare time has defeated six of the top 10 contenders for his title, which he won against Mbulelo Dyani.

Innocent “Tycoon” Mantengu had to lose the SA junior-featherweight boxing title to learn that he is beatable.
Sport
8 months ago

One of the remaining four contenders to his throne is Luzuko Siyo, who gets the chance to end Malindi’s dominance on Sunday at Orient Theatre. It will be the fourth defence for Malindi against the former SA junior flyweight champion from Duncan Village.

The hard puncher – who is rated No 7 locally – last fought in October last year in what was his 7th win in 22 fights. Malindi is undefeated after 18 fights.

"I will be ready for anything that Siyo throws at me. I had wonderful sparring from Ludumo Lamati, Moruti Mthalane, Lopez Mukondeleli, Sabelo Nkosi, Lerato Dlamini and Sikho Nqothole. They have different styles, size and power, which I withstood, so I am ready."

The main supporting bout kooks good with Jackson “M3” Chauke putting his SA and WBC International flyweight title on the line against rising star Luyanda Ntwanambi. Luthando Mbumbulwana and Mhlangani Sogcwali will do battle for the Eastern Cape junior featherweight crown, while Azinga “Golden Boy” Fuzile will headline the tournament with a 10-rounder against Lunga Stimela.

These fights will be organised by Rumble Africa Promotions.

Nkululeko “Bull Dog” Mhlongo is not planning his son’s 21st birthday party, which will take place on December 20, but is, instead, sweating out in ...
Sport
8 months ago

IBO cruiserweight boxing champion Kevin “Two Guns” Lerena, whose consistency has earned him recognition from the ratings committees of the WBC, WBA ...
Sport
8 months ago
Next Article