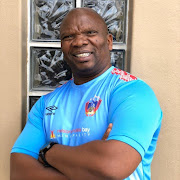 Former CEO of Boxing SA Tsholoelo Lejaka has described the death of Sithembiso “Sterra” Ngqezana as the loss of a 'loyal ambassador on mainstream radio' for the sport.

The amiably gentle giant who was an ace sport presenter for Umhlobo Wenene died on Saturday morning of natural causes.

“I am devastated,” said Lejaka

Ngqezana hosted Lejaka several times on his show when Lejaka was still with the boxing’s regulatory body he left few months ago.

“An accomplished and renowned sport reporter and host who sought nothing but progression and growth of the pugilist sport in particular and sport in general,” Lejaka described the man

Ngqezana – who wished for people to remember him for his humbleness and love for sport development – won the Boxing SA’s 2011 media personality of the year award in Durban.

“I spoke to him last week and he told me that he was not well. He died in hospital in Port Elizabeth where he lived with his family,” said Sdinile. “At one point last week he posted on Facebook that he had Covid 19 and was sure that he would defeat it.”