Manager calls for review of fight he believes his boxer won 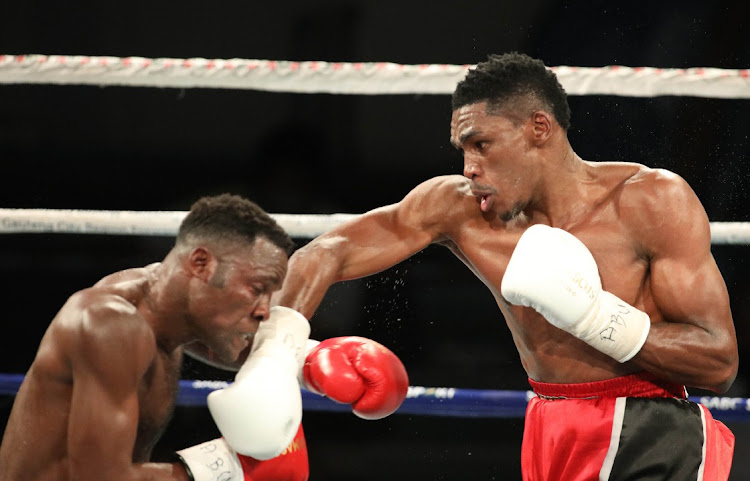 Thulani Mbenge lands a punch at Kuvesa Katembo of the DRC during their ABU Welterweight title in Soweto on Saturday.
Image: Veli Nhlapo

Bonyeme – who is responsible for the career of Kuvesa, his countryman from Congo – said: “I do not know if the judges scored the fight before the actual fight. They should have scored the fight based on who was the aggressor and busier between the two boxers and that was Katembo. The judges' scorecard does not reflect the complexion of the fight. Katembo threw more punches and Thulani responded once or twice. That is dubious scoring. How come Thulani was the winner when Katembo controlled the fight and took the initiative?”

Nomeva threatens to quit boxing if he loses to Dlomo

Bonyeme added that Mbenge should be calling for a rematch to clear his name after such a poor showing. “We would like a rematch but we know they won’t give it to us because they know what will happen. He ran the whole afternoon. I wanted to show the boxing fraternity that Thulani is nothing and we did, on Saturday – but the judges denied us a win.”

Kuvesa’s trainer, John Tshabalala, said: “We knew that Mbenge would bring the fight to us and he did not do that; he tried to knock us out and realised that Kuvesa is strong and then decided just to survive. We then came with  Plan B where we closed the distance and worked him in close quarters because we noticed that he was tiring. Mbenge beat us to the punch in the first half but we came back very strong in the late rounds and that is where Mbenge started holding and moved away so much that we could not land the punches we wanted. If the fight was to go 12 rounds, we would have caught up with him."