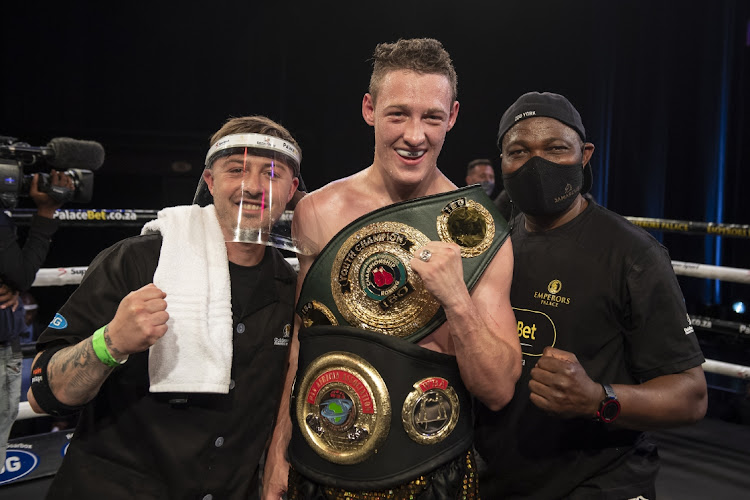 Brandon “Fast Gun” Thysse scored an impressive victory on Saturday night at Emperors Palace where he was crowned the king of the junior-middleweight Super Four Series.

Thysse stopped Boyd Allen in the second round of their 10-rounder. The victory earned him  60% of the R750,000 prize money that was put up by promoter Rodney Berman. Allen took home 40%.

Thysse dethroned Allen as the WBA Pan African champion, and he was presented with the IBO belt. BSA acting CEO Cindy Nkomo presented the newly crowned champion with a specially designed ring to confirm his status as the Super Four Series champion.

Ushered to war by successful trainer Damien Durandt, Thysse wasted no time and he went straight to work. A well-executed combo in the second round dropped Allen. He got up but was counted out while hanging on the ropes by referee Jaap van Niewenhuizen.

Jabulani Makhense made an impressive debut in the junior-welterweight division when the youngster who has been campaigning in the lightweight division stopped Erik Kapia Mukadi in the first round to win the WBA Pan African belt.

The official time of the stoppage was 2min:59sec. Makhense is under the guidance of trainer Sebastiaan Rothmann while Peter Smith is responsible for Allen’s career.

Damien Durandt has commended boxing promoter Rodney Berman for putting together a tournament that will take place at Emperors Palace on October 10 ...
Sport
1 year ago

Meanwhile, trainer Vusi Mtolo was smiling from ear to ear after his charge Roarke Knapp savagely knocked out Tristan Trutter in the second round of their 10-round junior-middleweight fight to grab third place in the Super Four Series.

Lebo “The Machine” Mashotoa’s hard work and determination was just too much for Keaton Gomes in their 10-rounder in the cruiserweight division. Mashitoa registered a lopsided points victory.

Berman said Mashitoa will face the victor between Akani “Prime” Phuzi and Chris “The Wolf” Thompson, whose bout is planned for December at Emperors Palace. Phuzi and Thompson were supposed to have met on Saturday night but the fight was postponed after Thompson sustained an injury during training.

In the opening fight of the afternoon behind closed doors on Saturday, Cowan Ray was on point when he pulverised Karabo Mokupi into submission in two rounds of their super-middleweight fight that was scheduled for six rounds.