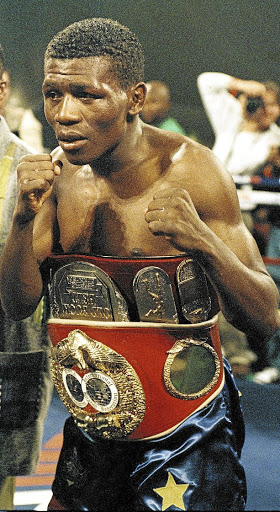 There is something unique about August when it comes to the history of SA.

McKinney won that belt from Bungu’s former stable mate Welcome “The Hawk” Ncita in 1992. The American — who won gold in the 1988 Summer Olympics in Seoul, South Korea — was bidding for the sixth defence when he kissed the title goodbye. Bungu was not given the slightest of chances but sheer hard work and determination enabled him to emphatically beat McKinney over 12 rounds in front of a big, animated crowd inside a marquee at the Carousel in Hammanskraal.

Bungu fought as if his life depended on the IBF belt. He defended the title 13 times and the humble-mannered icon from Mdantsane, Eastern Cape, holds the record of being the only local boxer to do that. The champion — who went on to beat McKinney in their rematch in 1997 at the same venue for their first fight — fought under the guidance of successful trainer Mzimase Mnguni, whose boxers fought under the Golden Gloves banner of internationally respected promoter Rodney Berman.

The Beast takes Hall of Fame snub graciously on the chin

The nomination of South Africa's iconic former world boxing champion Vuyani "The Beast" Bungu for the induction to the International Boxing Hall of ...
Sport
2 years ago

It was also in August when SA produced its first IBO champion in 1998 when Simon “Cheetah” Ramoni dethroned Englishman Patrick Mullings as the bantamweight holder in the United Kingdom. That was 10 years after the Florida, US-based, IBO was founded.

Ramoni’s illustrious career was guided by accomplished trainer Bokkie Martins in Toekomsrus on the West Rand. The boxer paved the way for the likes of Mpush “Lion King” Makambi,  Zolile “Bonecrusher” Mbityi and Peter “The Destroyer” Malinga, who also won belts from the same sanctioning organisation.