Nonina decries lack of support from BSA for women pugilists 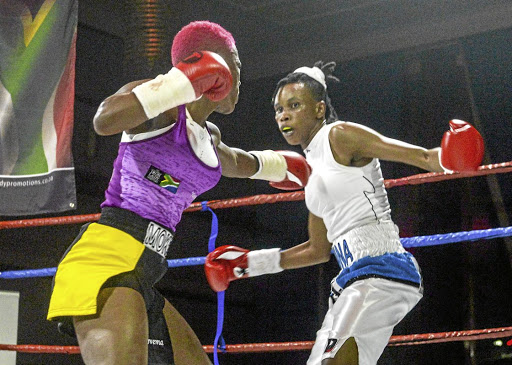 The death of SA female boxing champion Leighandre "Baby Lee" Jegels - who was gunned down by her police officer boyfriend in Mdantsane in the Eastern Cape in August last year - is the significant reminder of the Women's Month, says Bukiwe "Anaconda" Nonina.

Boxing SA, the regulatory boxing body, enforces that most tournaments here during August must be dominated by women, from officiating to action inside the ring. That is how Boxing SA demonstrated its support to the course - a tribute to 20,000 women who marched to the Union Buildings on August 9 1956 to protest against the extension of Pass Laws to women.

But there was no boxing action last year and that will be the case this year because of the Covid-19 pandemic. Nonina, the former SA and WBF bantamweight champion, would have fought for the IBF belt in April but the spread of coronavirus cancelled the fight because of the implementation of the national lockdown by President Cyril Ramaphosa to curb the spread of the deadly virus. But Nonina said the pandemic is no excuse.

"To be honest with you, if it was not for the death of Baby Lee this month last year, I would have forgotten that it's August because it is not like it is guaranteed that we fight every August to honour Women's Month," said Nonina, whose achievements helped her win Boxing SA's Female Boxer of the Year Award back-to- back in 2016 and 2017.

Jegels, 25, from East London, was gunned down by her boyfriend whom she had a protection order against.

The policeman - who also shot and injured the boxer's mother - died a few days later from injuries he sustained in a car accident he had few hours after he shot and killed Jegels.

"You are lucky to get that one fight in August," Nonina said.

"The truth is that many boxing promoters seem not to like women boxing. Even those promoters who get government grants to stage fights, have not been keen to include female fighters in their tournaments.

Former chairperson of BSA Muditambi Ravele was successful in enforcing that practise but all her efforts have gone down the drain. "Even the treatment is not the same between us and male boxers.

"BSA made promises that there will be changes but the only change was the board members. Even the current board members are doing nothing at all for us.

"A simple phone call from them to check us during the lockdown would have meant a lot."

Nonina said life was tough for female boxers in SA. "You know, one female boxer asked me to buy her toiletries and luckily my partner transferred some money to her. Others have already been kicked out of their flats because they cannot afford to pay rent. Don't be surprised to hear that some boxers are doing crime or have become prostitutes because we must all survive."

She said she was lucky to have her family, partner, promoters Elias and Fanakhe Tshabalala and promoter Joyce Kungwane on her side.