Boxing a family business for Malingas 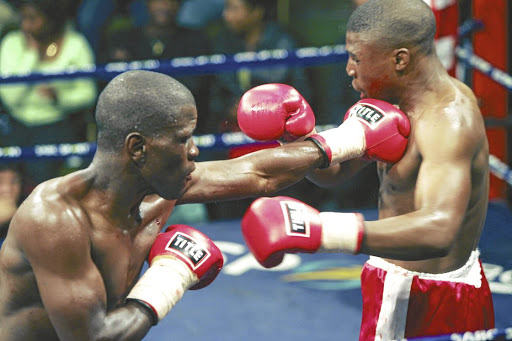 Peter "Destroyer" Malinga says his stoppage win over Geoff "Unleashed" McCreesh at DLI Hall in Durban in 1997 boosted his confidence as a fighter because the then unknown British boxer had savagely knocked out Dingaan "The Rose of Soweto" Thobela in the second round in Hammanskraal in November 1996.

Jaws dropped when the former WBO and WBA lightweight champion failed to beat the count. McCreesh's bubble - a run of eight wins - burst when fearless Malinga stopped him within the distance in Durban in 1997.

"That win was a springboard to my career and it gave me more confidence as a fighter," said the former SA welterweight champion whose next fight was a trip to Italy where he won the WBU title from Alessandro Duran today 23 years ago.

Malinga knocked the Italian clean out in round three on July 30 in 1997.

"It was a nice experience, fighting outside home," said the 46-year-old who is serving boxing as a trainer.

Malinga has already produced an SA and WBF lightweight champion in Ayanda "Greyhound" Nkosi from the JD Malinga Gym that was named after his late father and trainer Jabulani Malinga.

Peter - who proved his mettle by dethroning tough-as-nails Aaron "AK47" Kabi as the national welterweight champion in 1996 - says he was not nervous at all going to Italy.

"I went there super-fit," he said. "We trained very hard in our gym and it made it easier for us to deliver what we had prepared in the gym. Hard work in the gym actually pays dividends in a fight; it boosts your confidence and you just cannot wait to throw your first punch."

Malinga and Duran met for a second time, also in Italy, and the champion retained his title via a majority points decision. Malinga - who was promoted by Mike Segal - later failed to win the IBO title from Akhmed Kotiev in Germany on April 24 1999 but eventually made up for that loss on October 22 when he defeated then champ Spencer McCracken for the same title in Coventry, England.

Malinga later joined promoter Branco Milenkovic who staged most of the boxer's remaining 10 fights including a failed attempt to dethrone Joseph "Smokin' Joe" Makaringe as the national champion in 2004. Malinga eventually quit in 2006 with 29 wins, 19 knockouts, against 10 losses and a draw.

The first-born son of Jabulani works together with his younger brothers and former pro boxers Patrick and Vus' Umuzi in the family gym.