Thulani Mbenge itching to get back into the ring 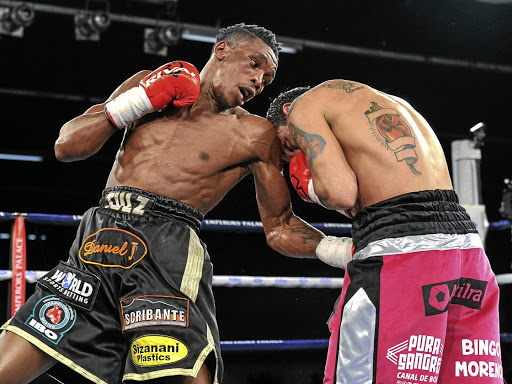 Thulani "Evolution" Mbenge says he just cannot wait for August 1 to forcefully embark on a journey to rediscover his missing personality.

"I am so excited to go back to the gym; boxing defines the person that I am," said the former SA, ABU, WBC International and IBO welterweight professional champion boxer.

He says he has been itching to train since March when President Cyril Ramaphosa announced the national lockdown due to coronavirus.

Mbenge suffered directly due to the lockdown because his signed, sealed and approved fight against Kuvesa Katembo Madorchee for the ABU title on March 28 was affected.

Mbenge, BSA's 2018 Boxer of the Year, said he comes alive when boxing, adding that there is something special that he cannot put his finger on it about him and the sport.

"It completes me as a person," said Mbenge, who began boxing at an early age growing up in Mdantsane.

Looking after 25 professional boxers, pertaining to food and rent, has become a mammoth task for boxing manager and promoter Patrick Bonyeme.
Sport
1 year ago

He went on to be a top amateur after winning a bronze medal when he represented SA in the 2014 Commonwealth games in Glasgow before turning pro in 2015.

The boxer has four siblings, including his twin sister Thumeka.

A well-grounded child with respect, Mbenge is a breadwinner whose last ring appearance was in July last year when he not only tasted defeat as a pro boxer but also lost his IBO strap to Sebastian Formella in Germany.

"I eat, walk, talk and sleep boxing," said the 30-year-old hard-puncher with 12 knockouts in 15 wins against a loss.

"The announcement that we can resume training has revived me because my dream as a boxer is on hold. But I am very positive that this storm shall pass."

He suggested that health protocols to curb the Covid-19 must be the way of life after this pandemic.

"Every individual boxer must have his own bandages, mitts [for hitting punching bag], gloves [for sparring], skipping rope and two pairs of mouth guards," he said.