Walking away from boxing is not easy 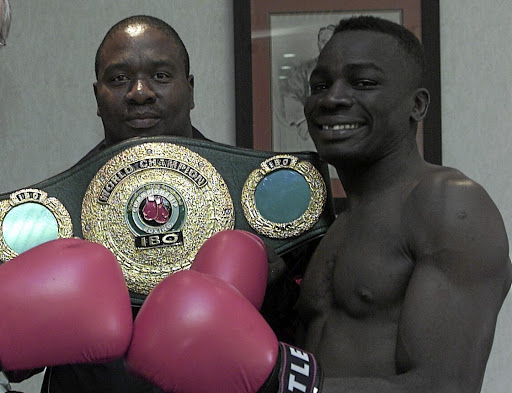 Manager Eugene Khanyile with his featherwelght champion Thomas Mashaba, one of a number of boxers he guided to titles. / ANTONIO MUCHAVE

It is often said that you cannot just walk away from something that you love and have done your whole life.

But what do you do when, intuitively, you know and can see that something is wrong, especially when the love of what you have done most of your life is causing you harm?

That is precisely the predicament that successful boxing trainer Eugene Khanyile is facing, since deciding to turn his back on boxing, the sport he had served with affection since he was 16 years old.

The former school teacher from Meadowlands poured his heart out to Sowetan yesterday about how grief-stricken he's been since the death of his charge Boitshepo "Gangster" Mandawe.

Mandawe, the tough-as-teak boxer from Meadowlands, Soweto, was stabbed to death on September 13 2015.

Khanyile was an unsung hero who guided a number of boxers to titles.

"When Mandawe was killed, I received a call from an official from Boxing SA who advised me to send him the banking details of Mandawe's mother because Boxing SA wanted to deposit some money on behalf of her son," said 53-year-old Khanyile yesterday.

"I got hold of Mandawe's mother. She gave me her bank details and I forwarded them to that official, but nothing came of it. The late boxer's family were on my neck demanding the money, and in fact they ended up accusing me of helping myself to their son's money. I was troubled, in my heart and soul.

"I called that official, who ignored my calls and never returned them. I was branded a thief."

The matter ended up involving Boxing SA CEO Tsholofelo Lejaka who - according to Khanyile - took money out of his own pocket and gave it to Mandawe's family.

Professional boxing gyms around the country are set to open on August 1‚ but with a strict set of protocols that forbid all forms of contact ...
Sport
1 year ago

Boxing trainers see no logic in return to training now

There is no logic in allowing professional boxers to resume training when they cannot engage in sparring which is the fundamental part of their ...
Sport
1 year ago

"I decided to walk away from boxing just to cool down," said the former Transvaal junior-lightweight champion.

Khanyile quit boxing in 1993 and began honing the skills of other fighters.

"You don't know how hurtful it was to walk away from the sport I loved so much because I did not know how people will view me after being accused of stealing money that was meant for a late boxer."

To make matters worse Khanyile's house in Germiston was burnt down.

"I don't know how it all happened. The investigation proved nothing but fortunately I was insured so the insurance met me halfway. Mind you I had resigned from teaching and started my own business, so basically I was unemployed."

Khanyile said he began getting unfair treatment from the boxing fraternity after the incident, with his former champion Edward Mpofu banned by BSA for life after being found guilty of using plaster of Paris bandages in his lost fight to Thanduxolo Gatyeni in East London in 2008. Khanyile was also charged with negligence but cleared due to a lack of evidence.