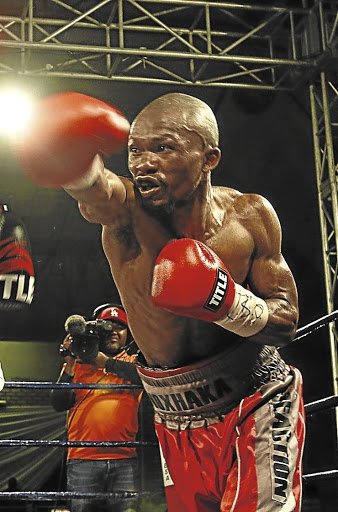 Not only is he unable to continue sending money home where his two children are part of the 11 that he looks after but he is also finding it difficult to raise money for rent here in Johannesburg.

While waiting to get inside the ring, fight and earn money, Konkco has been making extra money by being a personal trainer - but gyms are closed.

The pint-sized boxer who won the IBO mini-flyweight belt today in 2016 said: "I have a heavy load on my shoulders ... my two children and nine other family members. No one is employed at home. I must still eat and pay rent here in Johannesburg."

Konkco last fought on October 25 last year in Thailand where he lost to reigning WBC king Wanheng Menayothin, who has defended that title 12 times. He is undefeated after 54 fights, and he broke the record of Floyd Mayweather Junior, which is 50-0.

"I was paid well in my last fight but boxing money comes when you already have lots of debts," he said.

But he comes alive when we talk about his winning the IBO title. "This day in 2016 opened doors for me. Golden Gloves also played a big part, which earned me recognition in the world," said Konkco, who had failed in his first attempt to win the same title from Hekkie Budler in 2015.

Konkco left trainer Madoda Dyonase after that defeat and joined Budler's trainer Colin Nathan. Together they won the IBO title after Konkco's win over Siyabonga Siyo.

"Joining Colin helped me a lot. There is no bad blood between me and my former trainer. I made a business move and it paid well."

Konkco defended his IBO belt successfully four times before being stripped prior to challenging for the WBC title.

In what could well be interpreted by many as singing undeserved praises to the WBC Peter Ngatane has affirmed that the green and gold WBC belt is the ...
Sport
2 years ago

A supposed corpse was very much alive on Monday afternoon when 36-year-old boxing veteran Nkosinathi Joyi revved up Joey Canoy over 12 rounds to ...
Sport
2 years ago
Next Article