I did not mean to end his career - Isaac Hlatshwayo 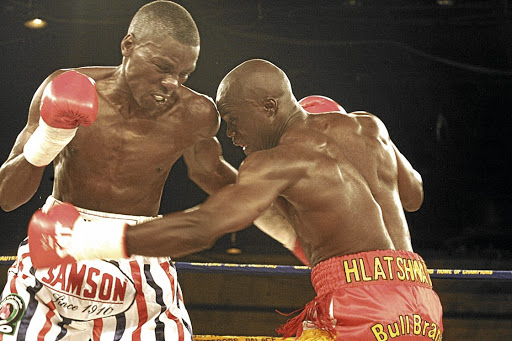 Joseph Makaringe and Issac Hlatshwayo during their IBO bout 13 years ago.
Image: Supplied

Forgotten SA former welterweight boxing king Joseph "Smokin' Joe" Makaringe, who ruled with an iron fist with 10 defences, was a man among men, says Isaac "The Angel" Hlatshwayo who ended the illustrious career of Makaringe 13 years ago today.

They are former gym mates under veteran trainer Eric Baloyi who honed their skills as amateurs in Giyani. Makaringe, with limited skills, had a lion's heart and Hlatshwayo says he also punched hard.

"He was always superfit, strong and certainly not a quitter and to defeat him, you had to outsmart him in thinking because he was clever," says Hlatshwayo who won their clash on points to capture his second IBO belt - the first being in the lightweight division.

Boxing chief Tsholofelo Lejaka says the impact of having no activity in boxing arenas is not easy on all involved and the hardest hit remain the ...
Sport
1 year ago

On that same day in the same bill, staged by Golden Gloves at Emperors Palace in Kempton Park, Makaringe's gym mate Silence Mabuza stopped Tanzanian Mbwana Matumla in the fifth round to regain the IBO bantamweight belt.

Makaringe retired after 12 years due to a cataract, or growth, in his right eye. He had knocked 25 of his 30 victims and had lost only four times, including to a knockout by Jan Bergman in 2001.

"I am not happy that I contributed to ending his career. He is one of the elderly brothers I looked up to while I was still an amateur. We come from one man [Eric Baloyi]," adds Hlatshwayo.

"Even on the day of our fight, I still had a lot of respect for Joe. I had to come up tops and win the fight, but not to beat him up. I just wanted to overcome him in a good way - little did I know that the outcome of the fight will end his career."

Hlatshwayo says he has not seen Makaringe in many years. Hlatshwayo went on to win the IBF belt and eventually quit in 2013 with 30 wins from 38 fights.