Diarora wants belt taken from him after 1994 bout 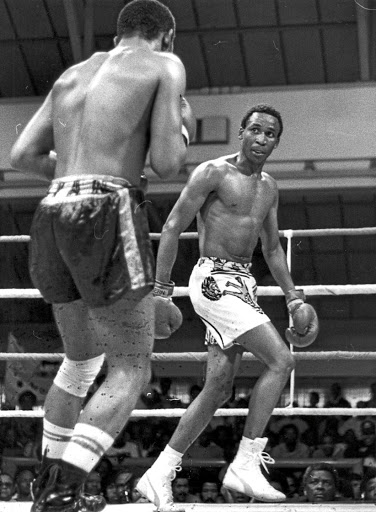 Ditau Molefyane, right, in a fight against Quinton Ryan in this file picture.
Image: Joe Sefale

Former world boxing champion Ditau "Diarora" Molefyane must get a sponsor that will pay $700 (about R12,700) on his behalf to the WBF, if he cannot raise that amount himself, to get his WBF belt which he won in 1993, explained Howard Goldberg.

The Cape Town-based WBF president was responding to a request made by Molefyane, who said his junior lightweight belt was not
returned to him after he had been dethroned by Mexican Aaron Zarate at Village Green in Durban in 1994.

He wore his belt going into the ring but lost the fight. That belt was Molefyane's and it was not at stake against Zarate. The promoter of that fight was supposed to have purchased the second belt which was to be contested for. When a boxer wins a title, they own it - period.

Lehlohonolo Ledwaba and Dingaan Thobela, and BSA CEO Tsholofelo Lejaka, are supportive of the idea by former world champion Chris Eubank to start a ...
Sport
1 year ago

"I gave Zarate my belt for television purposes; little did I know that I will not get it back," bemoaned Molefyane, whose victory against Ricky Rayner in Australia on March 19 1993 made him the first local boxer to win a WBF belt.

Goldberg made it clear that it was the duty of the promoter in Durban to make sure Molefyane got his belt back.

Goldberg, who was still a referee and judge at the time, said: "I am more than willing to assist Molefyane on one condition that he gets a sponsor who will pay about $700. Maybe I can try and get him a belt slightly cheaper.

"In most cases, champions go into the ring in a title
defence wearing their belts; they lose fights and the belt will be put around the winner's waist. The promoter of that fight must take it upon themselves that they give back the former champion his belt."

Molefyane, the lion who shuffled like the great Muhammad Ali, said: "I don't remember who staged the fight in Durban in 1994."