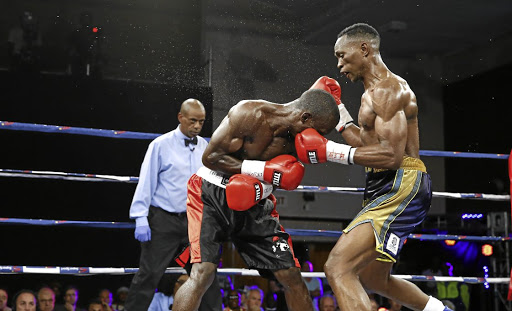 Tshifhiwa Munyai, right, on his way to stopping Osgood Kayuni in four rounds in their lightweight bout./Nick Lourens

It will be a case of do or die for former world boxing champion Tshifhiwa Munyai when the 34-year-old opposes hot prospect Siphosethu Mvula for the vacant SA lightweight title in Randburg, northern Johannesburg, on Sunday.

Munyai is the former Commonwealth bantamweight and IBO junior featherweight champion and a veteran of 35 fights. He is pitted against a 25-year-old prospect.

Defeat against Mvula, who has not won even the SA title, could signal the end of the road for Munyai unless he hangs in there and risk being a stepping stone for young fighters.

Munyai is an enormously talented boxer who has been around since 2003 with huge success. That includes being voted the best 2009 international fighter in the UK after winning and defending the Commonwealth belt in that country.

He also won the Danny Mancini Award for his achievements in the UK and the future looked bright for the boxer from Makwarela in Limpopo until he relocated to England.

Munyai came back home in 2017 to suffer shocking two stoppages to Azinga Fuzile and Rofhiwa Maemu. He then teamed up with trainer Alan Toweel Junior who cleverly advised him to move up to the lightweight class where the boxer has won three fights consecutively to qualify for the national title.

By right, Munyai should overwhelm Mvula in every department. But Mvula's trainer Mzamo Njekanye knows what to expect from Munyai, for he masterminded his third-round stoppage loss to Fuzile. Mvula, of Duncan village in Eastern Cape, has 15 wins, three losses and a draw.

The 12-rounder will now headline Charing Cross Promotions' bill. This is because Akani Phuzi's Congolese opponent Maroy Sadiki had problems with his visa and could not travel in time. That junior heavyweight bout was to top the five-fight card that will be staged by women promoter Marianna Toweel at Blairgowrie Recreation Centre.

Action is scheduled to begin at 1.30pm.